Soka Gakkai and the Quest for a World Without Nuclear Weapons 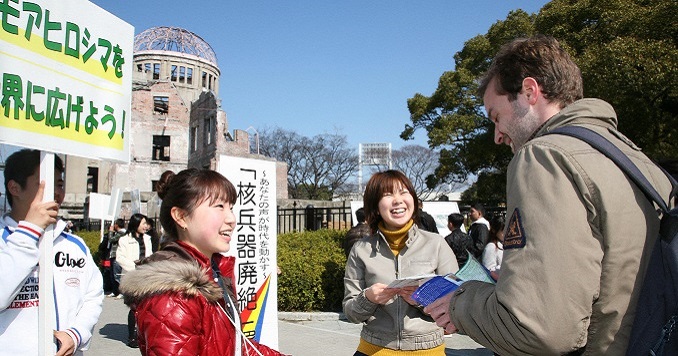 An overview of the Soka Gakkai’s decades-long drive to abolish nuclear weapons.

Together with human rights education, sustainability and climate change, women’s empowerment and humanitarian issues, nuclear weapons abolition is a key focus of the peace activities of the Soka Gakkai and the SGI (Soka Gakkai International).

On January 22, 2021, a major turning point in the struggle for nuclear abolition was reached when the Treaty on the Prohibition of Nuclear Weapons (TPNW) entered into force. This treaty absolutely prohibits the development, production, possession and use of nuclear weapons, without exception.

Civil society representatives celebrate as the Treaty on the Prohibition of Nuclear Weapons is adopted on July 7, 2017 [© ICAN/Clare Conboy]

Progress toward a treaty was fueled by discussions at the UN that reframed the issue of nuclear weapons from the perspective of the affected people instead of the perspective of states’ security. Civil society made significant contributions to the process, with the hibakusha—survivors of the atomic bomb and nuclear tests—leading the way.

In July 2017, the TPNW was adopted at a conference of the United Nations with the support of 122 states. By the end of October 2020, 50 states had ratified the treaty, paving the way for it to enter into force in January 2021.

Birth of an Abolition Campaign

The starting point for the Soka Gakkai in taking on the challenge of the abolition of nuclear weapons dates back more than six decades. Addressing around 50,000 youth gathered at Mitsuzawa Stadium in Yokohama, Japan, on September 8, 1957, second Soka Gakkai president Josei Toda made a Declaration Calling for the Abolition of Nuclear Weapons. 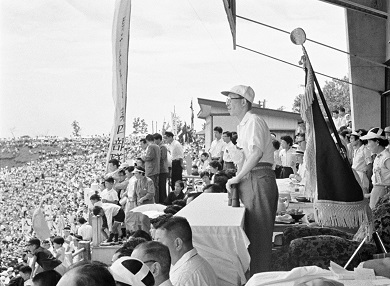 Second Soka Gakkai President Josei Toda at Mitsuzawa Stadium where he delivered his Declaration Calling for the Abolition of Nuclear Weapons on September 8, 1957 [© Seikyo Shimbun]

It was a stinging condemnation of these weapons and anyone who would use them, he declared, “The citizens of the world, have an inviolable right to live. Anyone who jeopardizes that right is a devil incarnate, a fiend, a monster.” Made only months before his death, he told the youth to regard this call for the abolition of nuclear weapons as “foremost of my instructions for the future.”

The youth of the Soka Gakkai at that time, including Daisaku Ikeda, who later became president of the organization, inherited this aspiration for peace. Ikeda later wrote that the essence of this declaration was that the use of atomic bombs, jeopardizing humanity’s right to life, is an absolute evil—that nuclear weapons are a manifestation of the very darkest aspects of human nature. Toda’s appeal was made amidst the Cold War, as the nuclear arms race was beginning.

Ever since that time, the Soka Gakkai has been actively promoting nuclear abolition. 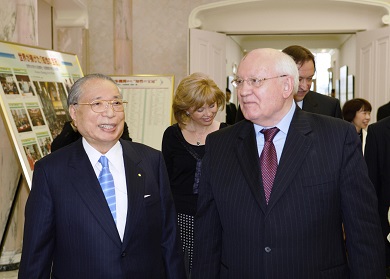 Ikeda and Gorbachev meet in Tokyo in 2007 [© Seikyo Shimbun]

By the 1970s, competition for the development of nuclear weapons was in full swing around the world. From this decade onward, Ikeda, as third president of the Soka Gakkai and then as president of the SGI, began to engage in dialogues with global figures from various fields in search of pathways to peace. Nuclear abolition has been a consistent theme of these dialogues, notably with Bernard Lown, president and cofounder of International Physicians for the Prevention of Nuclear War (IPPNW), which initiated the International Campaign to Abolish Nuclear Weapons (ICAN); Mikhail Gorbachev, president of the Soviet Union at that time; and Nobel Peace Prize winner Joseph Rotblat, founding secretary-general of the Pugwash Conferences.

In 1975, Ikeda visited the UN headquarters where he presented then secretary-general Kurt Waldheim ten million signatures calling for a ban on nuclear weapons that had been collected by youth of the Soka Gakkai in Japan.

Since 1983, Ikeda has issued annual peace proposals, in which nuclear abolition is consistently a major focus. These have provided inspiration for the organization’s peace activities at both the local and global levels.

In 2007, following a proposal by Ikeda, the SGI launched the People’s Decade for Nuclear Abolition, an international campaign to promote grassroots support for nuclear abolition. This was extended into a second decade after 2017.

Amplifying the Voices of the Hibakusha 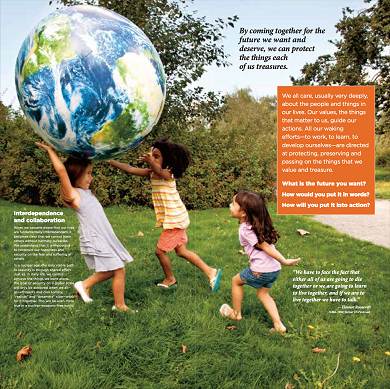 Soka Gakkai members globally have taken up the challenge of promoting dialogue and taking action for peace as a grassroots movement building public awareness.

In 1974, the youth division of the Soka Gakkai in Japan began to compile interviews with people who have lived through the horrors of war, including atomic bomb survivors. These were published as a book series. From the 1980s, the Women’s Peace Committee of the Soka Gakkai in Japan also began collecting and publishing the written and filmed testimonies of hibakusha, including the production of a multi-lingual DVD, as well as organizing exhibitions, lectures and similar events throughout the country. In the recent years, youth and students from Hiroshima, Nagasaki and Okinawa have collected and published compilations of testimonies. To date, the Soka Gakkai has published more than 100 antiwar books. (An English-language compilation of hibakusha testimonies, Hiroshima and Nagasaki: That We Never Forget, is available as a free PDF download).

In 2020, the organization collected more than 610,000 signatures for the International Signature Campaign in Support of the Appeal of the Hibakusha for the Elimination of Nuclear Weapons. 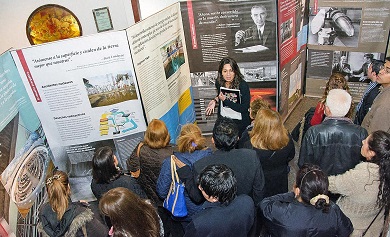 “Everything You Treasure” exhibition on display in San Miguel de Tucumán, Argentina, in 2016 [© Seikyo Shimbun]

Public exhibitions have been a major part of the organization’s efforts to promote awareness of nuclear issues. In 1982, the “Nuclear Arms: Threat to Our World” exhibition was launched and toured across the globe for approximately six years. From 1996 onward, the content was updated and relaunched as “Nuclear Arms: Threat to Humanity.” In total, it was shown in 24 countries, 39 cities and seen by some 1.7 million people.

In 2012, the exhibition “Everything You Treasure—For a World Free from Nuclear Weapons” was jointly created with ICAN. To date, it has been displayed in 21 countries and more than 90 cities.

Soka Gakkai youth around the world have been particularly active in a variety of initiatives, notably in Italy (the Senzatomica campaign), Mexico, the UK, the US and Malaysia. Additionally, more than five million signatures were collected in support of the Nuclear Zero petition by Soka Gakkai youth internationally.

In August 2015, based on Ikeda’s proposal, the International Youth Summit for Nuclear Abolition was held in Hiroshima, with youth from 23 countries joining. 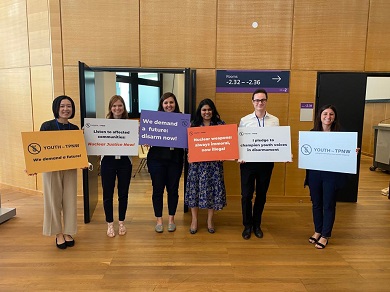 Soka Gakkai youth representatives at the First Meeting of the States Parties to the Treaty on the Prohibition of Nuclear Weapons (TPNW) in Vienna on June 21, 2022 [© Seikyo Shimbun]

As well as engaging in grassroots activities, the SGI, as a nongovernmental organization (NGO) in consultative status with the United Nations Economic and Social Council (ECOSOC), has been actively participating in and contributing to the international debate over crucial issues.

Since 2013, the SGI has been invited by host governments to take part in the Conferences on the Humanitarian Impact of Nuclear Weapons and has collaborated with other faith groups to issue a series of interfaith statements highlighting the moral and ethical dimensions of nuclear weapons.

In June 2022, the SGI participated in the historic First Meeting of States Parties (1MSP) to the UN Treaty on the Prohibition of Nuclear Weapons where it cohosted a side event highlighting the perspectives of affected communities. It also coauthored a working paper on peace and disarmament education together with Pace University’s International Disarmament Institute. At the parallel Youth MSP, youth from Europe and Japan co-organized a workshop on grassroots education for peace. 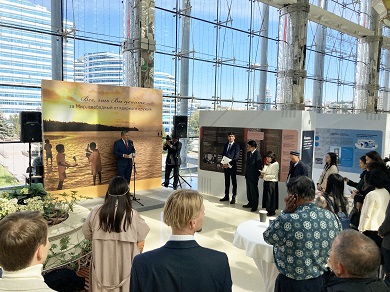 Launch of the “Everything You Treasure—For a World Free From Nuclear Weapons” exhibition in Astana, Kazakhstan, in September 2022 [© Seikyo Shimbun]

In July of the same year, ahead of the Tenth Review Conference of the Parties to the Treaty on the Non-Proliferation of Nuclear Weapons (NPT) and in the face of heightened nuclear tensions due to the conflict in Ukraine, SGI President Ikeda issued a statement calling for “No First Use” of nuclear weapons. During the NPT conference the following month, the SGI cosponsored a side event promoting this principle together with the Permanent Mission of the Republic of Kazakhstan to the UN and other organizations. On January 11, 2023, Ikeda issued a statement repeating the call for a “No First Use” pledge, together with a call for action aimed at restoring peace in Ukraine.

Such initiatives reflect the conviction that the key to abolishing nuclear weapons lies in bringing diverse actors together in this shared global enterprise. Civil society and youth in particular have important roles to play.

In “Building Global Solidarity Toward Nuclear Abolition,” Ikeda’s 2009 disarmament proposal, he states, “If nuclear weapons epitomize the forces that would divide and destroy the world, they can only be overcome by the solidarity of ordinary citizens, which transforms hope into the energy to create a new era.” And, as he affirms in his 2022 peace proposal, with the TPNW having entered into force, the “crucial stage” has now been reached in efforts to abolish nuclear weapons. The Soka Gakkai and the SGI remain committed to the complete abolition of nuclear weapons and the vision of a world at peace. 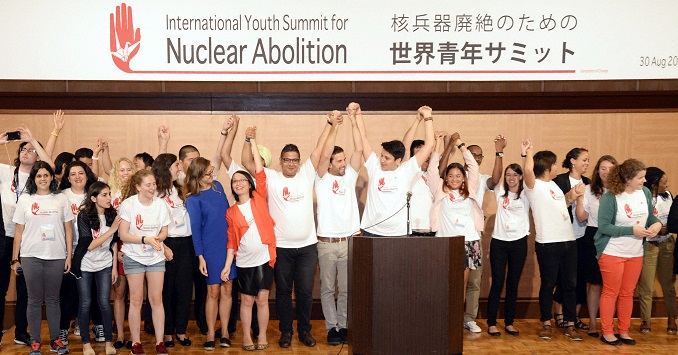