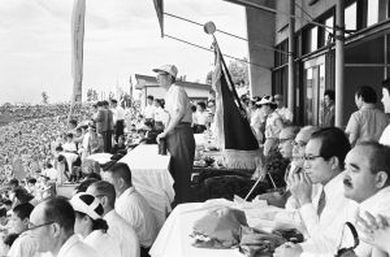 The second president of the Soka Gakkai, Josei Toda (1900–58) made a key declaration condemning nuclear weapons as an absolute evil which threaten humanity’s right to live, and calling for their prohibition in front of 50,000 Soka Gakkai youth gathered at Mitsuzawa Stadium in Yokohama on September 8, 1957. It was the height of the Cold War, when nuclear weapons capable of destroying all life on Earth cast a dark shadow over the destiny of all humankind.

Toda, whose own health was failing, called on the youth of the Soka Gakkai to take up the challenge of abolishing nuclear weapons from the world, emphasizing that there was indeed a solution to this man-made problem. This call became the impetus for the Soka Gakkai’s global peace movement, in which nuclear weapons abolition remains a primary focus.

Daisaku Ikeda was 29 years old at the time of Toda’s speech. He recalls that in making this declaration, Toda indicated that this was to be considered first among his instructions to his youthful followers and to subsequent generations.

Determined to make his mentor’s vision a reality, Ikeda has sought out paths to nuclear abolition, the renunciation of war and the construction of a culture of peace through engaging in dialogue with leading thinkers and decision-makers, as well as authoring annual peace proposals in support of the ideals of the UN.

He has sought out the moral core of the issue, stating, “If we are to put the era of nuclear terror behind us, we must struggle against the real ‘enemy.’ That enemy is not nuclear weapons per se, nor is it the states that possess or develop them. The real enemy that we must confront is the ways of thinking that justify nuclear weapons; the readiness to annihilate others when they are seen as a threat or as a hindrance to the realization of our objectives.”

In response to Ikeda’s 2006 proposal for reform of the United Nations, the SGI (Soka Gakkai International) launched the People’s Decade for Nuclear Abolition campaign in September 2007 and has been collaborating with international antinuclear movements such as the International Campaign to Abolish Nuclear Weapons (ICAN) initiated by International Physicians for the Prevention of Nuclear War (IPPNW). The launch coincided with the 50th anniversary of the 1957 antinuclear declaration, and the campaign aims to galvanize international grassroots public opinion toward the goal of nuclear weapons abolition.

The SGI has created a series of educational exhibitions that have been shown internationally and highlight the cruelty perpetrated by nuclear weapons. It continues to promote numerous activities aimed at nuclear abolition, creating a variety of forums in which people of all ages are able to exchange views freely and share ideas.

Josei Toda’s 1957 Declaration Calling for the Abolition of Nuclear Weapons can be read in full here.