The Soka Gakkai and the SGI (Soka Gakkai International) engage in activities to promote a culture of peace. The SGI has been accredited as a nongovernmental organization (NGO) in consultative status with the United Nations Economic and Social Council (ECOSOC) since 1983.

Working with the United Nations, NGOs and other stakeholders, the SGI undertakes efforts to address global issues through raising awareness among the public and bringing ideas and recommendations to the UN.

The SGI Office for UN Affairs in New York and Geneva is actively engaged at the United Nations.

Daisaku Ikeda’s annual peace proposals have played an important role in inspiring action toward these ideals both at local and global levels. 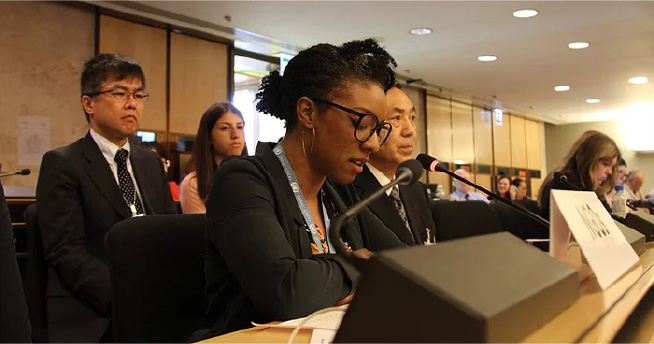 Hailey Ramsey-Jones of the SGI Office for UN Affairs introduces a statement by faith communities urging action toward a nuclear ban at the 2018 Preparatory Committee for the second session of the 2020 NPT Review Conference in Geneva, Switzerland
The SGI is working to expand grassroots support and global solidarity for the abolition of nuclear weapons. Examples include its People’s Decade for Nuclear Abolition campaign, now in its second decade, exhibitions communicating the inhumanity of nuclear weapons, recording the experiences of atomic bomb survivors and petition drives. The SGI also participates actively in UN policymaking processes on nuclear disarmament and advocates for a preemptive ban on lethal autonomous weapons systems (LAWS).The SGI and INPS (International Press Syndicate) have initiated a media project for nuclear abolition. View resources promoting peace and nuclear disarmament.
View recent activities 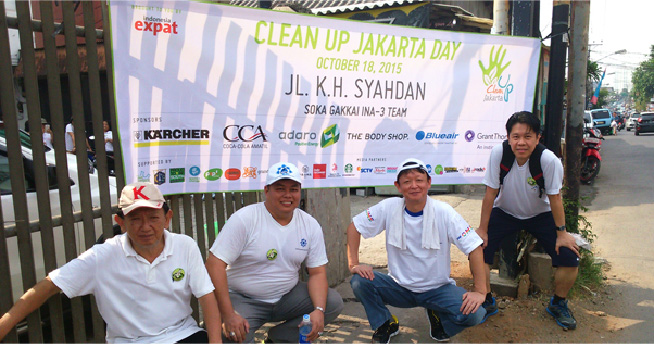 Soka Gakkai members who took part in Clean Up Jakarta Day
The SGI’s efforts to promote education for sustainable development (ESD) and climate action seek to engage a broad spectrum of people and inspire hope in each person’s ability to initiate change. They include exhibitions, a film as well as the SDGs for All media project with INPS and are designed to support the Sustainable Development Goals (SDGs) and promote the Earth Charter. As well as promoting sustainable development, local Soka Gakkai organizations also engage in cleanups, tree plantings and lectures. View resources that promote education for a sustainable future.
View recent activities 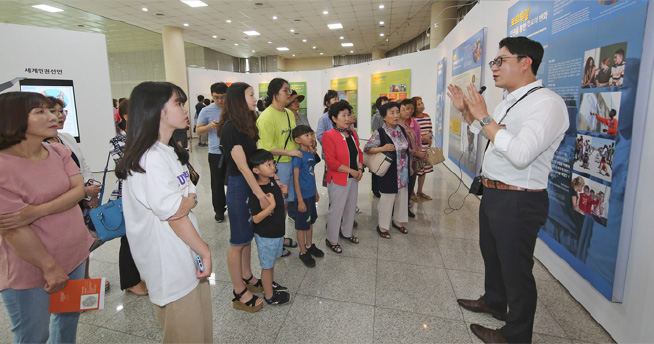 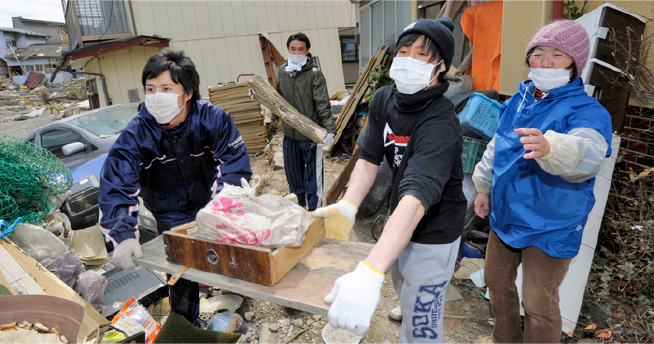 Soka Gakkai members assist in the clean-up after the 2011 earthquake and tsunami (Miyagi, Japan)
The SGI coordinates responses to disasters by distributing supplies, offering shelter and care at its centers and liaising with government and relief agencies. In collaboration with other organizations and in international forums, the SGI is working to highlight the unique ways faith-based organizations (FBOs) can effectively assist in disaster risk reduction, relief and recovery. It also supports refugee relief efforts through the UNHCR. View resources for the promotion of humanitarian activities and disaster prevention and reduction.
View recent activities 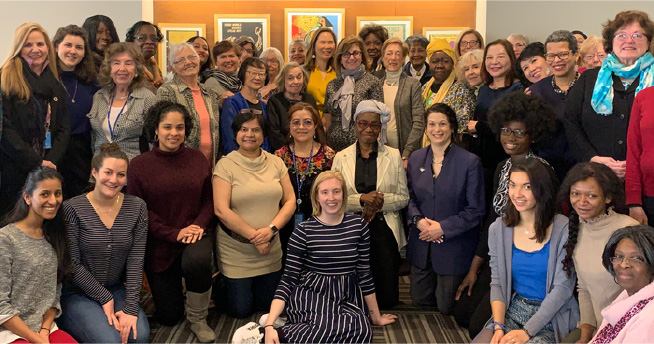 Members of the NGO CSW/NY after one of their monthly meetings
The SGI develops various activities to promote gender equality by supporting the Beijing Declaration and Platform for Action and gender dimensions of the SDGs. These include events supporting the activities of UN Women and the UN Commission on the Status of Women (CSW). Read more about the SGI’s activities to foster women’s leadership.
View recent activities