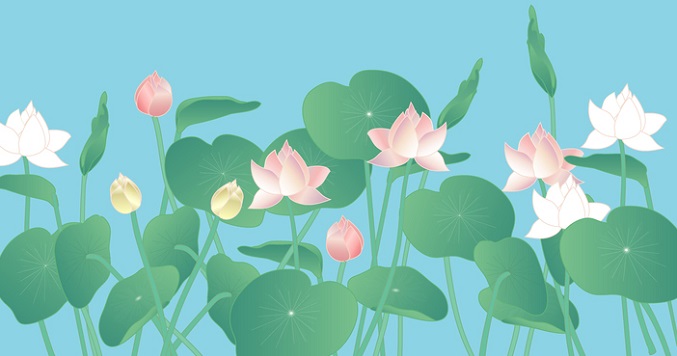 The Lotus Sutra is widely regarded as one of the most important and influential sutras, or sacred scriptures, of Buddhism. In it, Shakyamuni expounds the ultimate truth of life to which he was enlightened. The sutra’s key message is that Buddhahood, the supreme state of life characterized by boundless compassion, wisdom and courage, is inherent within every person without distinction of gender, ethnicity, social standing or intellectual ability.

The Lotus Sutra is a teaching that encourages an active engagement with mundane life and all its challenges. Buddhahood is not an escape from these challenges but an inexhaustible source of positive energy to grapple with and transform the sufferings and contradictions of life and create happiness. The Lotus Sutra is ultimately a teaching of empowerment. It teaches that the inner determination of an individual has great transformative power; it gives ultimate expression to the infinite potential and dignity inherent in each human life.

Near the beginning of the sutra, Shakyamuni declares to his disciples that the principle, or “law,” to which he has become enlightened is of such profundity that it is difficult to speak about and can only be comprehended by the wisdom of the Buddha. It is the ultimate reality of life—the fundamental law that underlies the workings of all life and the universe and is expressed as all phenomena. While this Mystic Law cannot be easily explained, it is encapsulated in the sutra, and it is by devoting themselves to this sutra and sharing it with others, Shakyamuni says, that his disciples and future followers can manifest this law in their own lives.

In Sanskrit, the language in which it was first written down, the sutra’s title is Saddharma-pundarika-sutra. Several different Chinese translations were made from the Sanskrit version of the sutra, among which the translation by Kumarajiva (344–413), titled Miao-fa-lian-hua-jing (Jpn. Myoho-renge-kyo), is considered to be particularly outstanding and facilitated the spread of the teaching in China and Japan.

In the sixth century, the scholarship of Zhiyi (the Great Teacher Tiantai) in China did much to affirm the supremacy of the Lotus Sutra amongst the teachings of Shakyamuni. Zhiyi discerned a deeply significant distinction between the first half of the sutra and second, where a radically new perspective on Buddhism is opened up. Here Shakyamuni refutes the idea that he first attained enlightenment during his lifetime in India and reveals that he has in fact been a Buddha since the inconceivably remote past. It can be inferred from this teaching that Buddhahood exists as a present and eternal reality in the lives of all people.

Some 1,500 years after Shakyamuni’s passing, Nichiren (1222–82), a Buddhist priest in Japan, crystallized in universally accessible form the ultimate reality expounded in the Lotus Sutra. He defined this as “Nam-myoho-renge-kyo,” the fundamental law that is the essence of all life and phenomena. His teachings opened the way for all people to awaken to their Buddha nature. They are a fulfillment of the intent of the Lotus Sutra, an intent synonymous with the compassionate desire at the heart of Buddhism, as expressed by Shakyamuni’s words in the 16th chapter that are recited daily by members of the Soka Gakkai:

At all times I think to myself:
How can I cause living beings
to gain entry into the unsurpassed way
and quickly acquire the body of a Buddha?