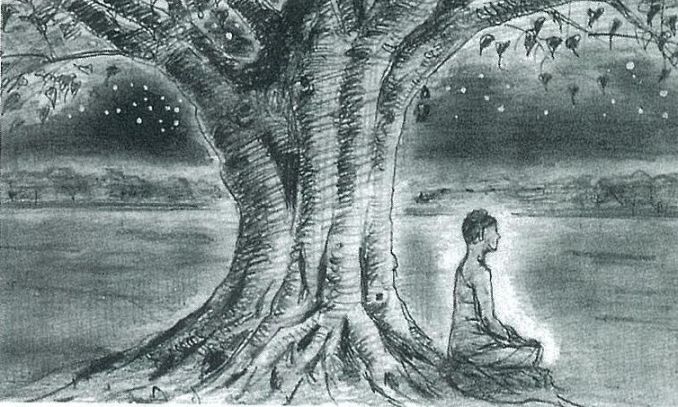 Shakyamuni under the Bodhi tree

Buddhism originates in the teachings of Shakyamuni (Siddhārtha Gautama), who was born in what is now Nepal some 2,500 years ago.

Shakyamuni was born a prince, but from a young age he became aware of and was profoundly troubled by the problem of human suffering. He became increasingly possessed by a longing to abandon the secular world and go out in search of a solution to the inherent sufferings of life. Buddhist scriptures describe four encounters which served to awaken in him an awareness of four sufferings common to all people—birth, aging, sickness and death—and a desire to seek their solution. Eventually, he renounced his princely status and embarked on a spiritual quest to understand how human suffering could be overcome.

For several years, he subjected himself to ascetic disciplines but found it impossible to reach emancipation through such self-mortification and eventually rejected these practices. Then, near the city of Gaya, he seated himself under a pipal tree and entered meditation. There he attained an awakening, or enlightenment, to the true nature of life and all things. It was because of this enlightenment that he came to be called Buddha, or “Awakened One.” After his awakening, Shakyamuni is said to have remained for a while beneath the tree, rejoicing in his emancipation yet troubled by the knowledge of how difficult it would be to communicate what he had realized to others. At length, however, he resolved to do so, so that the way to liberation from the sufferings of birth and death would be open to all people.

According to tradition, Shakyamuni then traveled widely throughout the Indian subcontinent sharing his enlightened wisdom, promoting self-reflection and teaching people how to unleash the great potential of their lives. His compassionate intention was to enable all people to attain the same awakened state of life that he had attained.

It is thought that Shakyamuni died at age 80. Following his death, his teachings were recorded by his disciples in the form of sutras and spread throughout Asia, giving rise to a number of distinct schools of Buddhism.