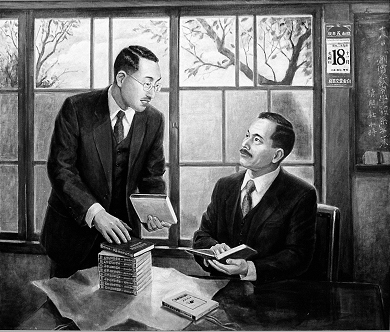 Tsunesaburo Makiguchi (right) and Josei Toda (left) holding copies of the first book in Makiguchi’s work Soka Kyoikugaku Taikei (The System of Value-Creating Pedagogy) on the day it was published—November 18, 1930 [by Kenichiro Uchida; © Seikyo Shimbun]

November 18 is the anniversary of the establishment of the Soka Gakkai.

Tsunesaburo Makiguchi, first president of the Soka Gakkai, and his disciple Josei Toda (second president) published the first in a series of writings outlining the system of soka, or value-creating pedagogy, on November 18, 1930, and this date marks the founding of the Soka Kyoiku Gakkai—the Society for Value-Creating Education. The word “soka,” which was coined by Makiguchi and Toda, is a combination of Chinese characters meaning “create” and “value.”

Makiguchi’s aim was to reform the Japanese education system in order to foster the unique creative potential of every child, and this endeavor was further strengthened by the philosophy of Nichiren Buddhism which also stresses the vast untapped potential of every individual.

Makiguchi continued these activities after Japan’s entry into World War II, and was openly critical of the militarist authorities, who were vigilant against any form of independence of thought or opinion. Makiguchi and the activities of the Soka Kyoiku Gakkai were monitored by the authorities, and in July 1943, he and Toda were arrested and imprisoned as “thought criminals.” Makiguchi, who refused to recant his beliefs, died in prison of malnutrition and old age on November 18, 1944.

While he was in prison, Toda determined to share widely Makiguchi’s ideals of value creation and the profound teachings of Nichiren Buddhism and the Lotus Sutra on which it is based. He was convinced that peace can be actualized through individuals taking responsibility to actively engage in an inner transformation, in order to draw forth their highest potential of compassion and wisdom, or Buddhahood. He was released shortly before the end of the war.

To this end, amidst the devastation of postwar Japan, Toda set about rebuilding the Soka Gakkai (literally “Society for the Creation of Value”) as an organization committed to eradicating war and human suffering that aimed to empower and give hope to ordinary people through the practice of Nichiren Buddhism.

Outlining the mission of the Soka Gakkai, Toda remarked, “While laying the groundwork for peace that will last hundreds or even thousands of years so as to repay our debt of gratitude to Nichiren, we must build a foundation for the happiness of all people that will endure throughout eternity.”

Toda’s successor, Daisaku Ikeda, was inaugurated as the third president of the Soka Gakkai in 1960, at the age of 32, and under his leadership the movement began an era of innovation and expansion that led to the founding of the Soka Gakkai International (SGI) in 1975.

November 18 has come to symbolize a day when each individual strengthens their own determination and sense of responsibility to contribute to the welfare of society and world peace in the spirit of the three founding presidents of the Soka Gakkai. The members of the Soka Gakkai are committed to putting into action the ideals and teachings of Nichiren Buddhism and becoming protagonists of peace within their local communities.