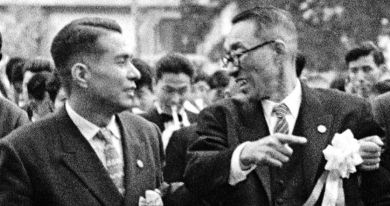 March 16 is a symbolic day for Soka Gakkai members, commemorating the occasion on March 16, 1958, when Josei Toda, second president of the Soka Gakkai, then in frail health, made an impassioned speech to 6,000 Soka Gakkai youth, entrusting them with the responsibility for the future of the Soka Gakkai and its efforts to contribute to the creation of a peaceful world and promote understanding of the humanistic philosophy of Nichiren Buddhism.

From that day, among his youthful successors, it was Toda’s closest follower, Daisaku Ikeda, who took up the baton of responsibility. He eventually became the third president of the Soka Gakkai in 1960 at the age of 32, and helped to develop the Soka Gakkai as a movement promoting peace, culture and education.

Toda passed away on April 2, 1958, just two weeks after the March 16 gathering, confident that his efforts would be continued by the youth in whom he had great trust. The previous year, on September 8, 1957, he had issued a Declaration Calling for the Abolition of Nuclear Weapons as his final instruction, at a meeting of 50,000 Soka Gakkai youth at Mitsuzawa Stadium in Yokohama. He had called on those present to take responsibility for carrying on the struggle against these inhumane weapons, which he termed a threat to humanity’s right to live.

March 16 is now viewed within the Soka Gakkai as a day of new departures, “of eternal beginnings and perpetual hope.” It is also an occasion for focusing on fostering capable youth.

Ikeda has stated, “It is a time when people renew their profound resolution to accomplish kosen-rufu, a time when they put their minds together and make a fresh start.” The Japanese phrase kosen-rufu is often interpreted as “world peace through individual happiness.” It signifies a vision of social peace brought about by the widespread acceptance of core values such as unfailing respect for the dignity of human life. On an individual level, it involves the construction of a state of life of indestructible happiness through a process of “human revolution” or inner-motivated change. On a broader societal level, it means building a peaceful society through a process of “rissho-ankoku”, whereby individuals actively transform their own lives and contribute to their families and local communities.

March 16 is an occasion to reaffirm such resolve and a challenge to youth to carry the vision of the founding presidents of the Soka Gakkai into the future. Around the world, Soka Gakkai members celebrate March 16 by holding commemorative meetings led by youth members. The spirit of March 16 is also embodied in the various peace-related initiatives carried out by Soka Gakkai youth members throughout the year.