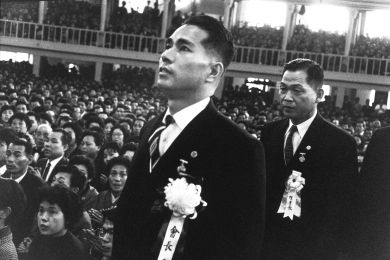 May 3 is known as “Soka Gakkai Day.” It was on May 3, 1951, that Josei Toda was inaugurated as the second president of the Soka Gakkai, and on May 3, 1960, that Daisaku Ikeda became the third president. May 3 is also “Soka Gakkai Mother’s Day,” symbolizing the vital role that women play within the organization.

Josei Toda became second president at a time when there were only around 3,000 Soka Gakkai members in Japan, seven years after the passing of first president Tsunesaburo Makiguchi, who died in prison for his beliefs during World War II.

Ikeda recalls that on that day, Toda announced his goal of achieving a membership of 750,000 households during his lifetime. Ikeda comments, “This was a soaring pledge to accomplish kosen-rufu (world peace through the spread of Nichiren Buddhism). The goal he announced was truly staggering. But I was overjoyed. Courage surged through me. My mentor, incomparable leader of kosen-rufu, had finally resolved to stand at the helm as president.”

Toda’s passionate efforts to realize this vision inspired hundreds of thousands of people throughout Japan to join Soka Gakkai over the next few years and eventually laid the path for Nichiren Buddhism to gain a following around the world.

In May 1960, two years after Toda’s death, Ikeda, then 32 years old, was inaugurated as the third president of the Soka Gakkai. Under his leadership, the movement began an era of innovation and expansion, becoming actively engaged in cultural and educational endeavors worldwide. Ikeda has continued to dedicate himself to fulfilling Toda’s dreams by developing initiatives in the areas of peace, culture and education. He has described May 3 as “a day to embark afresh on our struggle for world peace and the happiness of humanity.”

Toda had always emphasized the importance of the role of women in spearheading the organization’s development, and Ikeda also recognized that Soka Gakkai’s growth was largely due to the efforts of the women members—the “mothers of kosen-rufu.”

On April 27, 1988, at the first national Soka Gakkai Women’s Division meeting held in Tokyo, Ikeda therefore proposed that May 3 also be designated “Soka Gakkai Mother’s Day” in the spirit of appreciation for the sincere efforts of the women members.