The Development of Soka Gakkai in India

Nichiren foretold that the sun of Buddhism would move westward again to illuminate the land of India. Here is the story of that journey.

The ancient land of India is the birthplace of Buddhism with its philosophy of humanism, peace and compassion. The teachings of the Buddha gradually spread to illuminate all of Asia, including Japan, but over the centuries the practice of Buddhism all but died out in India.

In the meantime, Buddhism came to flourish in Japan, giving rise to various schools of thought, including that of the 13th-century Japanese priest Nichiren.

Nichiren’s philosophy of individual empowerment and social transformation found fertile ground in post-World War II Japan, thanks to the efforts of Tsunesaburo Makiguchi and his protégé Josei Toda, the founders of the Soka Gakkai.

Bodh Gaya: The Sun Of Buddhism Begins to Rise Again in India

In February 1961, Daisaku Ikeda, the young and newly inaugurated third president of the organization, visited Bodh Gaya, the place where Shakyamuni, the founder of Buddhism, is said to have attained enlightenment some 2,500 years ago. During the visit, Ikeda and his party buried a plaque there on which he had inscribed a vow to help actualize the peace and prosperity of Asia.

Among Nichiren’s writings is a passage that reads:

In the 1950s, Ikeda’s mentor Josei Toda, the second Soka Gakkai president, in turn wrote in a poem:

To the people of Asia
who pray for a glimpse of the moon
through the parting clouds,
let us send them,
instead,
the light of the sun.

For Ikeda, the visit marked the historic beginning of this process. At the time, there were no members of the organization in India and very few in other parts of the world.

Ikeda was deeply determined that he would fulfill the vision of his mentor, and gradually a handful of practitioners began to appear in different parts of the country. On October 12, 1975, the first general meeting of these members was held in Kolkata. Twelve of them attended, together with five guests.

When Ikeda next visited India in February 1979, a total of 40 members from throughout the country gathered in New Delhi to meet him. The encounter was a pivotal moment that inspired the participants to strengthen their commitment to actualize Nichiren’s vision of kosen-rufu—the positive transformation of society through the spread of Buddhism.

The organization gradually began to take shape, with regular meetings for Buddhist practice and study and more effort going into supporting and encouraging individual members in their practice. On January 3, 1986, Bharat Soka Gakkai (BSG) was officially registered with the Indian government, planting its roots firmly in Indian soil.

From that point on, BSG began to more vigorously undertake activities for the promotion of peace, culture and education in cooperation with like-minded organizations. As a result, BSG and Ikeda’s writings and efforts for peace have become increasingly recognized and appreciated in Indian society. An indication of this is that Ikeda has to date received 19 honorary doctorates and professorships and numerous awards in India.

“India is a great nation of young people, a rising superpower of the 21st century with profound spiritual roots. I have no doubt that . . . India will play a pivotal role in the emergence of a new renaissance of life as we persevere in our brave efforts to triumph in this challenging time.”
—Daisaku Ikeda

When Ikeda next visited India in February 1992, more than 3,000 people attended a cultural festival held to celebrate the occasion. It was at that time that Ikeda composed and presented the BSG members with a poem entitled “Dawn of India,” which came to be regarded as a guideline for the organization. The poem encourages Indian members to build an ideal land that fuses modernism and spirituality and is underlined by a profound humanity.

A Garden of the Future: Soka Bodhi Tree Garden

In 1993, BSG established the Soka Bodhi Tree Garden, a hub for cultural exchange and the study of Buddhism on the outskirts of Delhi.

Since its opening, over 4,000 Bodhi trees have been planted in the garden. In his message on the inauguration of the Soka Bodhi Tree Garden, Ikeda said, “I am positive that from among those who will come to visit this garden in the future . . . when the Bodhi trees that are saplings now have grown tall and robust and are luxuriant with fresh green leaves, there will emerge great leaders.”

Every year, crops grown in the Soka Bodhi Tree Garden are donated to a nearby village and money from their proceeds goes for community projects including building new classrooms in schools and supporting education for young girls.

In October 1997, Ikeda visited India again, meeting for dialogue with several dignitaries including then Prime Minister Inder Kumar Gujral. At that time, he predicted that together with the United States and China, India would be one of the “three pivots” of the 21st century.

On November 29, 2015, at Ikeda’s suggestion, the plaque that had been buried at Bodh Gaya in 1961 was reburied at the Soka Bodhi Tree Garden during an exchange visit by Soka Gakkai leaders and youth representatives from Japan.

BSG continues to contribute to Indian society through various humanitarian relief and awareness-raising activities. Most recently, in July 2021, BSG launched the “BSG for SDG” campaign advocating the Sustainable Development Goals (SDGs), which includes a dedicated “BSG for SDG” mobile app and website, exhibitions promoting sustainable development and building a culture of peace.

In December 2021, based on the core spirit of the SDGs of “leaving no one behind,” BSG and Jaipur National University (JNU) launched the “Change Maker Humanity Award” to honor and recognize protagonists of change in the fields of education, medical and community healthcare and social services, especially during the COVID-19 pandemic.

Today, BSG has over 270,000 members spread over 600 towns and cities across India, and the original spirit of Buddhism—a spirit that seeks the happiness and empowerment of each person and the peace and flourishing of society—is flourishing again in the land of its origin. 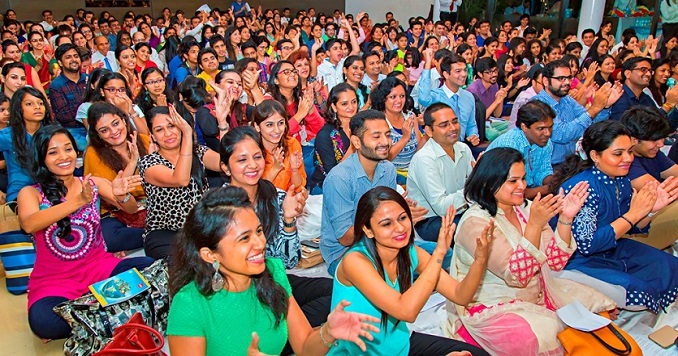