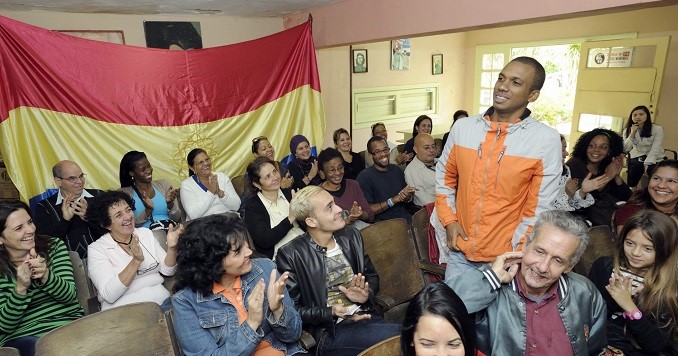 Joannet Delgado, general director of the Soka Gakkai of the Republic of Cuba, shares her journey of discovering Nichiren Buddhism and how it took root in her country.

My family encountered Buddhism when my older sister married a Japanese Soka Gakkai member and herself became a member in 1974. My sister relocated to Yokohama, Japan, where she became actively engaged in Soka Gakkai activities.

On one occasion, at a women’s meeting at a local Soka Gakkai center, she shared her experience of how six years of Buddhist practice had changed her life. The meeting was attended by Kaneko Ikeda, the wife of Daisaku Ikeda, the organization’s president. After the meeting, Mrs. Ikeda learned of the financial difficulties my sister and her family were going through and warmly encouraged her saying, “When you practice Buddhism earnestly, you will develop a life state that will enable you to travel back and forth between Japan and Cuba whenever you wish.”

About a week later, my sister had an encounter with Mr. Ikeda himself at the same center. He encouraged her wholeheartedly, telling her he had heard all about her from his wife and that she was an invaluable person with an important mission in life. This encouragement became a turning point for my sister. In 1984, she visited Cuba for the first time in 10 years. While there, she shared her experience of practicing Buddhism with my mother, who was so deeply touched that she too decided to start practicing. A year later, my father began chanting Nam-myoho-renge-kyo as well. 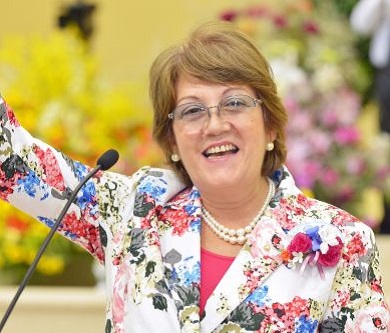 In 1990, having transformed their financial situation, my sister and her husband invited our parents to visit them in Japan, where they were able to learn more about Buddhism. At the time, however, I wasn’t really interested in it. I had studied biochemistry at the University of Havana and was working as a researcher, and I wasn’t convinced when my sister said that you can change anything if you chant Nam-myoho-renge-kyo.

My mother then gave me the English translations of some of Mr. Ikeda’s books on Buddhism, which she had brought from Japan, and asked me if I could translate them into Spanish. As I was translating them, I found myself becoming interested in the profound philosophy of Buddhism. I finally began to understand what my sister had been trying so hard to teach me about the philosophy of human revolution.

I decided to start chanting and received my first benefit: I was able to attend an international scientific conference in Ecuador in 1993, and the presentation that I gave there on my research turned out to be a great success. But for me, above all, it was my great good fortune to be able to meet and talk with the Soka Gakkai members in Ecuador. I found them to be like a warm family, and through them, I began to deeply appreciate the organization.

When I returned to Cuba, I spoke to many of my colleagues about Buddhism. Although Cuba is a socialist country, freedom of religion is guaranteed. However, most people are either Christian or practice indigenous religions, so not many were interested in an oriental philosophy like Buddhism. 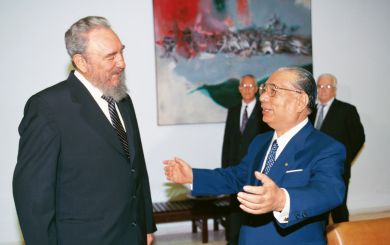 In the meantime, in 1996, Cuba’s relations with the US worsened again. In the midst of this tense political situation something unbelievable happened. We heard that Mr. Ikeda would visit Cuba. His visit was announced in all the media. The TV aired live scenes of his arrival at the airport, his lecture at the University of Havana and the ceremony at which he was presented with the Order of Félix Varela of the First Grade. One especially surprising thing was seeing President Fidel Castro wearing a suit when he met with Mr. Ikeda—I had never seen him wearing anything other than a military uniform!

In between the series of important events in Cuba, Mr. Ikeda made time to genuinely encourage Soka Gakkai members. He invited my parents to his hotel and warmly embraced and encouraged them. During his three-day visit, Mr. Ikeda filled the hearts of the Cuban members, who were scattered around the country, with hope. It was from this time that the organization began to gel in Cuba. Step-by-step we exerted ourselves to earn trust and disseminate the philosophy of Buddhism in our country as model citizens.

The public transport system in Cuba is very poor. Often one has to wait hours to catch a bus. It took a lot of patience to make it to local Soka Gakkai meetings on time. To be able to encourage members living far away we had to rent a car, which was no easy task, because so many people wanted to rent cars. We had to negotiate over and over to secure a car, and for this we had to chant a lot. Finally, when we had rented a car, we would make full use of it by visiting as many members as possible, often covering more than 2,500 kilometers. Through such steadfast efforts, on January 6, 2007, 10 years after Daisaku Ikeda’s visit, the Soka Gakkai of the Republic of Cuba (SGRC) was officially recognized by the Cuban government as a religious organization.

Today, the philosophy of peace taught in Buddhism is coming to be appreciated more and more by Cuban society. In October 2015, for example, SGRC was one of 23 religious groups that participated in the International Meeting for Interfaith Dialogue and World Peace in Havana. Our exhibition on the abolition of nuclear weapons was met with great enthusiasm by those who viewed it. Recently, during a discussion on religion in the Cuban parliament, President Raúl Castro spoke highly of the Soka Gakkai, saying that it was contributing greatly to the stability and peace of the nation.

The Soka Gakkai in Cuba has grown from seven households in 1996 to a membership of more than 1,000 people today.

In 2015, Cuba and the US resumed diplomatic relations. At this crucial time for our nation, we are determined to do our best to direct our beloved country toward peace and happiness.