Changing Poison into Medicine for All Humanity 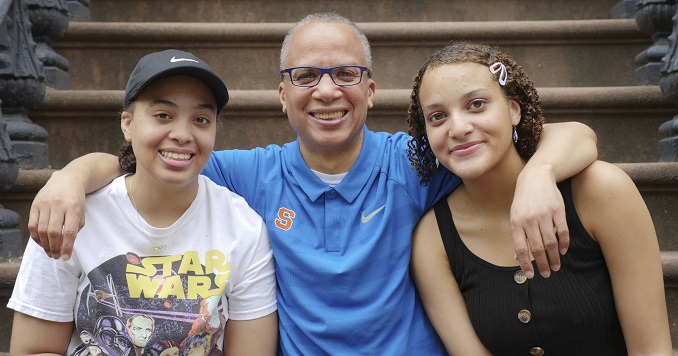 Sherman with his daughters [© Jeremy Joffee]

Sherman Edmiston III reflects on a legacy of racial discrimination and how his practice of Nichiren Buddhism is empowering him to turn it around.

I grew up in Harlem, New York, in the 1960s and 70s, during a time of racial conflict and poverty. In my community, there was a strong drug influence because of the lack of opportunities and hopelessness. Violence was an everyday occurrence, and many people close to me were murdered.

Often, when my friends and I went to track practice in a largely Italian immigrant neighborhood, we had racial slurs and bottles thrown at us. My parents wanted the best for me, so they sent me to a private school, but I felt alienated from the other students and struggled. My teacher even said once that I was remarkably uninformed about the world around me when much of that world was hostile and unavailable to me.

In high school and as a young adult, these experiences of indignity because of my race started to involve the police. In college, my roommate and I were held at gunpoint just because we were in a predominantly white neighborhood and someone had called the police on us. I was hit by a car while riding my bike, and I was arrested for confronting the driver. Back in Harlem, I witnessed an unarmed black man beaten and killed by the police. And when I spoke up, the police showed up at my house in an intimidating fashion. I was afraid and decided not to testify about what I had witnessed.

These were just the highlights, but it was daily life.

I got into the program, but then I found out that my colleague and I, both young black men, were excluded from the mentorship activities with senior executives.

I graduated with a bachelor’s degree in engineering and went on to get my Master of Business Administration at the University of Michigan. Even with these credentials, I was accused of cheating on an entrance exam for an internship program. I got into the program, but then I found out that my colleague and I, both young black men, were excluded from the mentorship activities with senior executives.

Still, I landed a full-time job at a major bank on Wall Street and worked my way up. I thought that, now, as a financially successful member of society, I’d gain some respect and dignity. But that wasn’t the case. On a cab ride home after work, my best friend and I were pulled over by police, and we were held at gunpoint. Even at work, my senior executives sent over an African American man to persuade me into taking a position significantly lower than my level of accomplishment. I was deeply insulted and left the company.

Despite these obstacles, I never gave up on my dream and continued to move up in my career. But the pain and heartbreak that we, as Black Americans, and all people of color experience is real. I had to navigate the world differently, and anger and resentment built up inside.

My father introduced me to Nichiren Buddhism when I was in middle school. I begrudgingly attended Soka Gakkai activities, but I rarely chanted on my own. Even in college, I attended meetings sparingly. With the support of a district men’s leader, I started participating in Soka Gakkai activities. I also had the opportunity to support President Daisaku Ikeda’s visit to New York in June 1996.

After the event, President Ikeda asked us all to gather. We were all standing there rigid, but when he came over, he asked us to sit down and relax. He then made and served each of us tea. In just this simple act, his humanity and his genuine care for each of us broke through the walls of mistrust in my life. For the first time, a glimmer of confidence and hope emerged, and I decided that I would regard him as my mentor in life.

But, I had difficulty balancing work, family and faith, and my practice fell off. The accumulation of bitter experiences and a childhood trauma took their toll; they were eating me alive. I resorted to drugs and alcohol to self-medicate and used work to escape having to deal with the reality of my own life. On Thanksgiving Day in 2000, it all came to a head. I was at work and had a breakdown.

I called my father, and he rushed over to pick me up. In the car, he urged me to chant Nam-myoho-renge-kyo, sharing that it was the only way I was going to overcome my suffering. That day, I started chanting. I didn’t know if I’d ever be whole again, but I just knew I had to keep on chanting.

This was the beginning of major changes in my life. I started a family and my own firm. We faced numerous challenges—business failures, financial struggles and my daughter’s health—but at each crucial moment, I recalled a passage from Nichiren Daishonin’s writings: “A sword is useless in the hands of a coward. The mighty sword of the Lotus Sutra must be wielded by one courageous in faith.”

I won over each obstacle based on faith—by supporting my district members and challenging my human revolution. With the courage derived from my Buddhist practice and President Ikeda’s guidance, I’ve worked my way up to the upper echelons in my profession. And in December 2015, I resigned from my firm, where I was a partner, to donate a kidney to my father and support my daughter and family. I have built a different career, one that I could never have dreamed of, and now sit on the Board of Directors of four publicly traded corporations.

Many times, I am the only person of color in the room, and my colleagues have very different beliefs and life experiences. But I stand proud to be who I am—a black man and disciple of Ikeda Sensei—and I am not afraid to speak up.

Despite our differences, my colleagues and I have formed close friendships and have worked on youth programs devoted to erasing inequities that prevent students of color from gaining entrance into New York’s public high schools. Through coaching my son’s little league baseball team, I have developed close friendships with many members of the police department. Together, we have worked on many community empowerment initiatives for youth and families, and on building trust between officers and the communities they support.

If I change something deep inside my heart, the world can’t help but change.

In 2017, I woke up to a commotion in my neighborhood. Apparently there had a been a shooting nearby. A young black man was on the ground in handcuffs surrounded by police, and tensions were high.

I knew the young man’s grandmother, so two other neighbors and I went down to the precinct together to ensure his safety. Later, I was able to have a heart-to-heart dialogue with the lead detective. He explained everything, and he thanked me for not pre-judging and for respecting him as a human being. The next day, the charges against that young man were dropped.

These experiences have solidified in me that, if I am to be a positive and transformative agent of change, I have to fight with every cell in my body to not allow the anger and resentment within my life to overcome me. I realized that I had no choice but to transcend my family’s and my own bitter history to connect with the humanity and Buddha nature of the person right in front of me, no matter who they are, and build bridges with those around me. This is the only way I can change poison into medicine to start the healing of all people.

To be very honest, I have to challenge my life condition to channel anger and resentment into something of value every day. My children, nieces and nephews, and young people of color are all dealing with craziness every day, and I’m concerned for all.

That’s why I’m devoted to Nichiren Buddhism and sharing it with others. That’s why I chant a lot. And through studying the writings of Nichiren Daishonin and Ikeda Sensei, I’m reminded that true freedom is found within—in our ability to transcend our conditions and circumstances and transform them.

President Ikeda writes: “We can manifest the brilliance of the world of Buddhahood anywhere. This is the teaching of Nichiren Buddhism. Our first two presidents, Tsunesaburo Makiguchi and Josei Toda, united by the bonds of mentor and disciple, demonstrated this with their own lives. In a prison cell that he described as ‘cold to the extreme,’ Mr. Makiguchi wrote, ‘Depending on one’s frame of mind, even hell can be enjoyable.’”

For most of my life, I harbored resentment and waited for the other person to feel my suffering. But Buddhism teaches that waiting for something outside of us to relieve our suffering is to seek the Law outside ourselves. It all comes down to my own human revolution—if I change something deep inside my heart, the world can’t help but change. I can harp on the unfairness and be deadlocked, or I can take full responsibility for my circumstances, manifest the power of the Mystic Law and give myself freedom.

Also, compared to the times I grew up in, there is progress. You see a rainbow of people all over the world uniting in the recent protests for justice. I just joined a Soka Gakkai district meeting over Zoom in a neighborhood that was racially charged and hostile to African Americans in my youth, and members of different backgrounds shed tears together about what’s happening.

We are making progress on many levels, but there is still a lot of work to do around race, gender, class and LGBTQIA+ inequality. But to me, the fact that young people everywhere are boldly standing up against these indignities is itself progress. That gives me hope.

Adapted from an article in the August 2020 issue of Living Buddhism, SGI-USA.