Stepping Up for Others 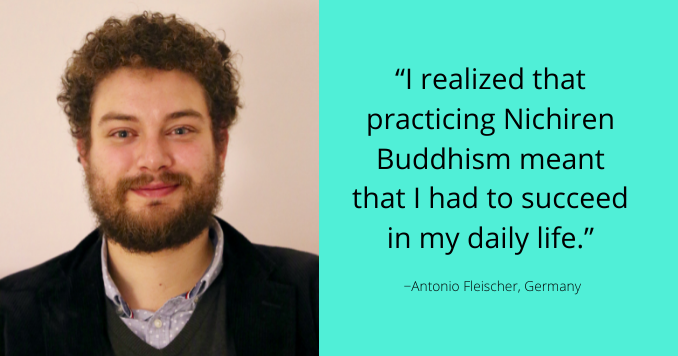 After years of struggling in his studies, Antonio Fleischer discovered a surprising cause for success.

Between the years 2008 and 2017, I was ex-matriculated three times from the university where I had been studying, either because I hadn’t passed a certain exam or because I had failed to complete my course in time.

My academic performance was always below average. Normally, a student has to collect 30 credits each semester. Up until this point in time, I had never achieved more than 15 credits, and my grades had been dismal.

A professor even recommended that I receive behavioral therapy. The therapist I saw said I was not suited to academic study and advised me to abandon my studies and pursue a technical training program. If I were to continue failing at university, I would eventually be too old to start a training program and would end up without any kind of qualification.

I didn’t want to give up, though. Third Soka Gakkai President Daisaku Ikeda says that the path to victory lies in never giving up—precisely when one is confronting adversity.

Besides my studies, I had been working as a chess teacher for children in primary school—a job that gave me great joy. It was my love of teaching chess that made me decide to study to become a teacher in the first place and pursue a teaching program in 2017.

In 2018, I was appointed vice student division leader of the Soka Gakkai in Germany (SGI-D). I was surprised because I was far from being a model student. A couple of months later, at the end of the third semester, I realized that I was still trapped in my old habits since I had only accumulated about half of the school credits I needed. I knew I would fail again in my studies if I continued like this. I asked myself, “What can I do? What would President Ikeda do if he were in my shoes?”

I started studying The Writings of Nichiren Daishonin and the book Discussions on Youth—For the Leaders of the Future by President Ikeda. In the latter he writes: “You must win in your life, win over your own weaknesses, win in society and win in exams” and, echoing Josei Toda, second Soka Gakkai president: “Study as hard as three people and have the faith of one.”

I realized that practicing Nichiren Buddhism meant that I had to succeed in my daily life, otherwise no one would take me seriously. I was thinking about the students of SGI-D and how discouraging it would be for them if they saw me, as the leader of the division, fail in my studies.

I realized that practicing Nichiren Buddhism meant that I had to succeed in my daily life.

In Discussions on Youth, I read: “My dream is that all of you will enjoy a brilliant future, play leading roles in all fields of society and throughout the world and fully reveal your potential.” And, “Faith is your foundation, and study is your priority.” I decided I would work one day less per week in order to be able to attend the lectures on linguistics, a subject I had failed three times. This meant a loss of 200 euros per month in earnings, but I made this sacrifice for the sake of my studies. President Ikeda’s words encouraged me: “Life is a struggle. We live in a harsh world. Freedom is not gained by being idle or passive. Whether we like it or not, ours is a competitive world.”

I thought, “I need to face the challenge! I have to fight! I must win!” Up to this point I had disliked the idea of competition in life. However, I realized that competition can also be value creating. I resolved to win, not just for my own sake and not for the purpose of being better than others, but in order to create value for myself and others.

“But how can I win?” I asked myself. I recalled President Ikeda’s guidance that it is important that our prayers be specific and concrete.

I determined to pass all my exams, set a goal for my average score and began preparing for my exams earlier than I had ever done. I was determined to study three times harder than anyone else and to give my all. I still didn’t know how I was going to pass, so I chanted one hour every morning during the exam period in order to study efficiently and effectively. I took all the exams I had planned to take. The last test of the semester was on the same day as the start of an SGI European Student Division Course in Frankfurt. In order to arrive there on time, I finished the exam in half the time and left the room while everyone else was still writing. Although a lot of my fellow students failed, I passed!

That semester, I achieved six more credits than required. This was a personal record, and it even surpassed the university requirements.

The next task was to complete my seminar papers. Although I had been studying for many years, I had never written a seminar paper. With lightning speed, I learned how to write a good academic paper and submitted two papers within two weeks. I received a lot of positive feedback on my work from my lecturers. One professor even praised my paper, saying it was the best essay out of all and that she wanted to talk with me about the topic of the paper because she had an idea for a research project in this field.

I was challenging life head-on, full of joy and energy. I want to maintain this attitude and life state.

The biggest benefit through all of this was the inner change I underwent. When I look back and ask myself in what way I changed, I realize the following: In the past, I was not able to perform because I didn’t see the purpose of making an effort. Since it was just about myself and my progress, I didn’t feel motivated to exert myself. I was self-content and stagnant. I see now that that attitude did not make me happy.

When I felt a sense of responsibility toward others, as leader of the student division, I realized that I wasn’t simply living for myself.

This awareness woke me up. I felt an enormous life force and wisdom well forth from chanting Nam-myoho-renge-kyo. I was challenging life head-on, full of joy and energy. I want to maintain this attitude and life state.

I am determined to live each day with this attitude and a renewed sense of appreciation. I want to live with joy for the sake of my own happiness and that of others—for the purpose of bettering the world.