My Father, Karma and Me 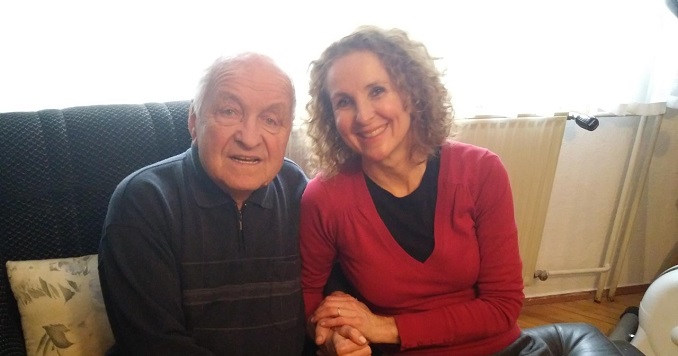 Anita with her father

How a new perspective on the role of karma enabled Anita Prezelj to see beyond her father’s alcoholism and dementia.

Growing up, I was always closer to my father than my mother. There was a deep bond between us. However, over the years, this somehow disappeared.

Ten years ago, my father, who is now in his 80s, began to show the first signs of dementia and symptoms of depression. It was also around this time that he started to abuse alcohol. He is not a heavy drinker, but due to his age and dementia, even a little alcohol is too much for him. He can stay sober for a few days, but when the opportunity arises, he drinks as much as he can. The combination is terrible. When he drinks, he is neither mean nor aggressive but becomes even more withdrawn—it’s as if he’s totally gone. It’s difficult to talk to him about this because he denies it and becomes manipulative, which is typical behavior for an alcoholic.

I have been through all kinds of emotions regarding my father—anger, sadness, shame, powerlessness. I have pitied him because of his miserable state and missed him because he was so absent. I have often felt contempt toward both him and my mother. At times, I have been angrier with my mother because she was not able to set limits or stop him from drinking.

Together, my sister and I have tried all possible solutions—long discussions, preaching, quarreling, begging, providing professional help, but all in vain. Somehow, I sought to make him the person I wanted or needed him to be.

As a practitioner of Nichiren Buddhism, I felt it was down to me to change the situation. I have chanted Nam-myoho-renge-kyo about it on and off with different goals, such as my father achieving sobriety or that one day I would stop minding it. However, apart from short-term relief, nothing changed—I was still very much convinced that he had to change his destructive behavior.

In 2017, while in Japan, I sought advice on how I could use my Buddhist practice to improve the relationship. However, at the time, I was so angry with my father that I was unable to chant to see and respect the inherent dignity of his life—his Buddhahood—as advised. Later, I had an opportunity to talk to a member who also had an alcoholic parent. I was relieved to hear that even though I was angry and may even hate my father’s behavior, it was still possible to respect his Buddhahood. I found this very encouraging and left Japan with the determination to transform the situation and change poison into medicine.

It was in July 2018 that I heard a Japanese member share encouragement she had received from President Daisaku Ikeda that resonated with me strongly. When she was young, the lady’s father had declared bankruptcy. She was so angry with him and blamed him for her unhappiness. President Ikeda asked her if she thought her father should change. She nodded—of course, she was angry with him! However, rather than focusing on changing her father’s karma, he encouraged her to focus on changing her own, noting that her karma was to be a daughter of a bankrupt man.

It was a revelation, like I had been knocking on the wrong door all this time! From that point onward, I began to chant with a completely new approach: to change my karma as a daughter of an alcoholic father. Viewing the relationship from the wider perspective of karma revealed deeper layers, and I began to see the relationship differently.

I saw how lonely my father was. I saw how lost in his own world he was, suffering silently and not really being able to reach us. Maybe this was due to his traumatic childhood. During World War II, at the age of five, he found himself all alone. His father was sent to a concentration camp; his mother and five brothers and sisters were forced to leave Slovenia and exiled to Germany. Their farm was burned to the ground. I knew this story and that my father had somehow remained locked in this traumatic experience.

I could not change his karma; I could only change my own.

This realization affected me deeply, and I began to understand that he had probably done his utmost to lead the best life he could and had not been able to do more. I had blamed him for my unhappiness but began to understand that I could not change his karma; I could only change my own. It was time for me to take full responsibility for my own happiness. It was a relief. As a child, I had felt it was my responsibility to “rescue” my parents, especially my father. I finally understood that for me changing poison into medicine meant breaking free from the deeply rooted disrespect I had for myself and my tendency to look for quick-fix solutions outside myself.

With my feelings of shame and guilt lifted, I was able to release my father from the pressure I put on him to stop drinking. Chanting Nam-myoho-renge-kyo helped me develop an awareness of his role in my karma: to awaken me to the dignity of life—my own and that of others. He has taught me to develop deep respect, take care of myself and not push others to change so that I feel better.

The next time I was with my parents, I was able to see beyond my father’s behavior. Even though it was difficult to talk to him because of his dementia and hearing problems, we were able to sit in the garden peeling apples together. The conversation was simple, but I was somehow able to find the right words. When I was leaving, my father hugged me and said, “Please come home again soon, it is nice when you are around!” I was so grateful to be able to share these moments with him. I’m sure he could sense that I no longer had any contempt for him.

We have been talking more than before, but mostly, we have been laughing a lot. We used to share the same humor, and finding it again has been like finding a precious and irreplaceable treasure. Even though he still drinks and I still do not like it, I have found my long-lost father.