The Spirit to Keep Going 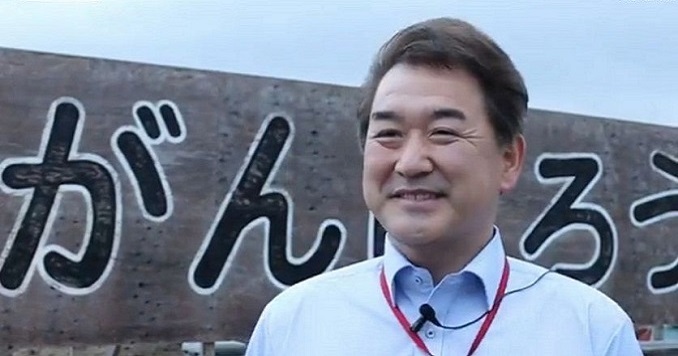 On March 11, 2011, a powerful 9.0-magnitude earthquake shook Japan’s northeastern Tohoku region creating a tsunami with waves up to 40 meters high. In a matter of moments, towns and cities were destroyed and thousands of people lost their lives. In the aftermath of the destruction, amid the rubble in the city of Ishinomaki, an enormous wooden signboard appeared with the words, “Keep going, Ishinomaki!” (Ganbaro! Ishinomaki). Images of the signboard were featured in the news media, and as Japan and the world rallied to support Tohoku, the signboard became a symbol of the people’s resilience and of hope.

Ever since the earthquake, Kenichi Kurosawa, the local plumber who built the sign, has devoted himself to the well-being of his community. In this article, taken from an interview on the 10-year anniversary of the disaster, he talks about the process of recovery and what the sign, which still stands, signifies. 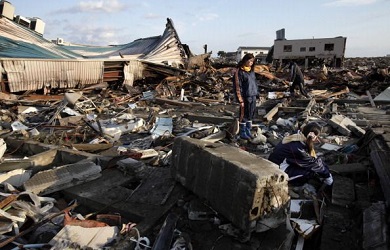 When I first saw the aftermath of the tsunami, it looked like a bombed-out battlefield. In the blink of an eye, the familiar things of everyday life had been wiped away.

My town had become a sea of rubble. When I went to where my store was supposed to be, people were wandering around in despair looking for their families and their homes. It was just misery.

Disasters can happen anywhere. Before I moved to this area, I had checked on a hazard map which areas were susceptible to earthquake damage and tsunamis and chose the location of my store based on that.

However, just 14 months later, the Great East Japan Earthquake struck. More than 500 people died in this area alone. This made me realize that we cannot trust in assumptions, no matter where on this Earth we are. Situations beyond our imagination can suddenly become our reality.

Still, I questioned if doing it would be useful, asking myself, ‘Should I really do this?’

At that time, in a state of despair, I wanted to give hope to people here; I didn’t want to lose to the tsunami. Thinking about what I could do, I decided to create a large sign saying, “Keep going, Ishinomaki!”

I shared my idea with others and, although I thought a sign like this might be useless, they supported the idea, and people I went to school with even helped me make the sign. Still, I questioned if doing it would be useful, asking myself, “Should I really do this?” I was conflicted. But while I was making the sign, a neighbor came up to me and said, “Mr. Kurosawa, you’re working hard, I’ll do my best too.” Some people who saw me working on it shed tears; others applauded. In the end, I was very glad I did it. I built the sign with a deep determination, and I resolved to hold onto that determination and continue spreading hope.

Then the sign began to be featured in the media. After an article about it was published in the Seikyo Shimbun [the Soka Gakkai’s daily newspaper], I received a message from President Daisaku Ikeda saying, “I saw the paper. You stood up and you won.” That has really given me hope.

A Matter of the Heart

It seems that 10 years have passed in a blink of an eye, but for many of the people who so unexpectedly lost family members, time is still frozen.

“Reconstruction” can mean different things. In terms of the landscape and infrastructure, if there’s a strong administration, things will eventually be restored. However, when it comes to healing the hearts of the people who live here, we can’t call it reconstruction until people have regained the ability to look forward. It is the “reconstruction” of the people that’s most important—the “reconstruction of the heart.” I have come to see that, even under circumstances like ours, it is still possible for human beings to find hope and to move forward. I’ve realized that people can’t live without other people.

I have come to see that, even under circumstances like ours, it is still possible for human beings to find hope and to move forward.

Disasters change the everyday into the unexpected in an instant. That’s when it becomes clear whether you are a person who can be concerned about others or someone who can think only of their own protection. Soka Gakkai activities, which are focused on our ideal of building peace in our local communities, develop that kind of active concern. It’s important that we develop it right now in our daily lives, while we can. 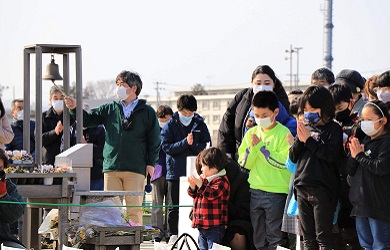 Commemorating the anniversary of the earthquake [© Kenichi Kurosawa]

We have to pass on the memory of this earthquake to the next generation. I am trying to help in that effort by rebuilding the signboard every five years together with local children. In addition, we grow sunflowers annually from the seeds of a sunflower that sprang up next to the sign in the first year, which I called the “gutsy sunflower!” So now children learn about disaster prevention through planting and raising the seeds of that sunflower. Each year, we name the sunflowers the second, third and fourth generation, and so on. So, for example, when it comes the 50th generation and the children ask, “Why are these sunflowers called the 50th generation?” the adults can then share the story of this natural disaster and educate them.

The children who live here may grow up and move to other areas, and people will come here from elsewhere. So, we must continue passing on this knowledge to our children as one way of educating them in disaster prevention.

I’m determined to create a future here, firmly grounding myself and facing everything head-on. I want to continue my activities while staying close to those people in need and, at the same time, as the sign says, “Keep going, Ishinomaki!” I want to look forward, to do my best and create hope together with those who are able to move forward. These are the two wheels of the cart—the strength to move forward and the strength to support others. I would like to deepen both. I will do my best to always remember what I felt when the disaster struck. 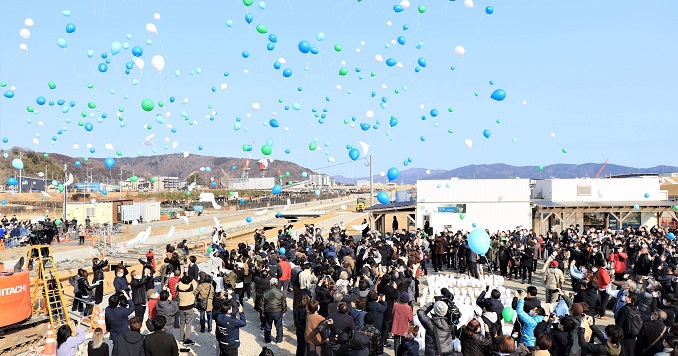