Taking a Stand for Justice 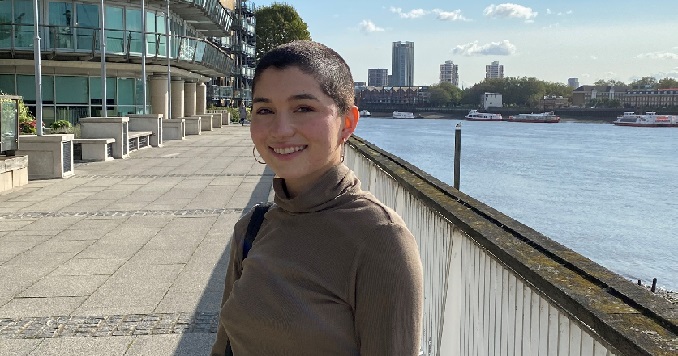 Isabella McQuaker-Kajiwara from the UK used her Buddhist practice to open up a dialogue with her former classmates about her negative experiences at school.

I’ve been practicing Nichiren Buddhism since July 2019. At the beginning of June 2020, I began chanting a lot every day to deeply transform a few challenges I was faced with. The first challenge was deciding whether to accept a place on an expensive and prestigious master’s degree program, which I had been working toward for a year. My second challenge was finishing my undergraduate dissertation as I was struggling to focus and maintain confidence in my work. My third challenge was that I wished to confront my classmates from my former high school about experiences of racism, sexism, classism and homophobia. This had been on my mind for years and had increased in urgency in the wake of George Floyd’s tragic murder and the unprecedented scale of the global civil rights movement that followed.

Rather than allowing my problems to fill me with anxiety and fear, I began to welcome them for giving me the opportunity to grow as a person.

All these challenges seemed almost too big to overcome. A passage in the writings of Nichiren Daishonin reads: “By observing the fury of the rain, we can tell the greatness of the dragon who caused it; and by observing the flourishing of the lotus flowers, we can tell the depth of the pond they grow in.” This passage became a great source of encouragement for me during this time, as it truly forced me to consider the way I viewed my circumstances. Like the lotus flowers growing in the muddy pond, the greatest victories arise from the muddiest conditions. Therefore, rather than allowing my problems to fill me with anxiety and fear, I began to welcome them for giving me the opportunity to grow as a person.

My mentor President Daisaku Ikeda, encourages: “Everything begins with prayer.” I decided to chant earnestly with absolute conviction in the power of my prayer. As well as focusing on what I needed to transform in my own heart, I knew that I also needed to take action. I took every opportunity to participate in SGI-UK activities and support and encourage fellow members. These efforts gave me the confidence to take bold actions in my daily life. In turn, in the moments when I doubted myself, my fellow SGI-UK members encouraged me.

I was finally able to write a letter addressed to my former high school community regarding the discriminations that I and others had faced. I read it aloud and then posted it as a video on social media. I made sure that I included no names of people involved in the experiences I laid out, centering it on the message I was trying to convey rather than who was in the “right” or “wrong.” I also added references to educational resources that people could look into to create awareness.

I had been hesitant to speak out on these issues because I knew that it would make certain people uncomfortable and maybe even outraged. However, my determination to speak out about these issues was not about pointing a finger of blame on individual people, but about engaging in powerful dialogues and creating happiness and value for everybody involved. The biggest challenge of all was in shifting my own mindset toward them, moving from perceiving the situation as one of confrontation to trying to see Buddhahood in others, listening to them and engaging in genuine and respectful dialogue.

I was powerfully moved by how well my video was received. Within a day it had over 5,000 views and over a hundred comments from people recounting their own experiences. I was also contacted by an online organization to lead a campaign in my former school for decolonizing and expanding the school curriculum so that it truly reflects equality and diversity. The director of the school is now engaging with proposals to solidify recurring student representation in the formal curriculum review process.

By acknowledging his possible fears about the situation, I was able to approach him from a standpoint of compassion rather than anger.

The video became a starting point for many dialogues. One of the most powerful conversations I had was with one of my former teachers, who had used an ethnic slur in the classroom. I received a pretty strongly worded email from him about the video; he was demanding to know why I made the claims I had. This angered me because it seemed that his only concern was the damage that could be done to his reputation. My chanting allowed me to transform this anger into compassion, and I reached out to him for a heart-to-heart exchange. By acknowledging his possible fears about the situation, I was able to approach him from a standpoint of compassion rather than anger. So, it wasn’t a surprise when he agreed to meet me for a dialogue. He asked for my suggestions about what he could do in the future to be more cognizant of the words he uses and how they can affect students.

The most rewarding aspect of this experience was realizing the power that one person can have in taking that first courageous step. I am determined to continue dreaming big for the sake of humanity. To that end, I want to dedicate my life to championing human rights and help build a society guided by the principle of respect for the dignity of life.

This clarity of vision for my life also helped me overcome the other two challenges I mentioned earlier. I rejected the master’s offer as I realized that my mission is in the field of sociology instead. With freshly infused confidence in myself, I was able to engage with my dissertation with enthusiasm, as I no longer saw it as a burden but an opportunity to polish my life even further. I’m inspired anew by the conviction that my inner transformation is inherently linked to the transformation of the whole of society.

Adapted from the November 2020 issue of Art of Living, SGI-UK.