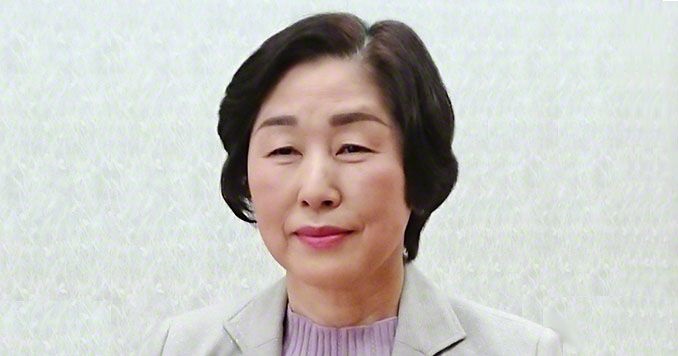 March 11, 2021, marked the 10th anniversary of the Great East Japan Earthquake. Over 15,000 people lost their lives in the quake and resulting tsunami that devastated communities in Japan’s Tohoku region. Mitsue Enomoto, a Soka Gakkai member from Kesennuma City in Miyagi Prefecture, recalls that day and reflects on the journey since.

The 10 years since the Great East Japan Earthquake on March 11, 2011, have flashed by for me. They have been turbulent years interspersed with sadness. Even so, there have been many joyful moments as well. Every day has been a struggle in the aftermath of that devastating earthquake, but this is exactly why I have cherished living every single day to the fullest, being determined to live without regrets.

I couldn’t utter a sound as I just stood there, overwhelmed by the incomprehensible sight of the landscape being twisted by the relentless force of nature.

I was just starting to prepare dinner when I felt a powerful tremor—much stronger than I had ever experienced before. A short while after the earthquake subsided, the wireless-activated disaster warning system started. I couldn’t hear clearly what was being announced, possibly because of strong gusts of wind that were blowing. Looking out of the window, I saw people in our neighborhood evacuating to higher ground. I fled too, together with my pregnant daughter and her husband who lived nearby, to an elevated area. I think it was around that time I finally understood that the disaster warning system had been alerting us to an impending tsunami.

I remember the smell of burning oil assailing my nostrils and black smoke rising into the air as the tsunami engulfed the town. I couldn’t utter a sound as I just stood there, overwhelmed by the incomprehensible sight of the landscape being twisted by the relentless force of nature.

I distinctly remember my feeling of panic as I couldn’t reach my husband and son on the phone. To top it all, it started snowing. No one budged—everyone just stood motionless in the cold.

Just when I was becoming concerned about the well-being of my pregnant daughter, we met a Soka Gakkai member who offered us help, suggesting we all go to his sister’s home up on the hill. The kindness and hospitality his family showed us was deeply moving, as we felt frozen to the core, both physically and mentally. 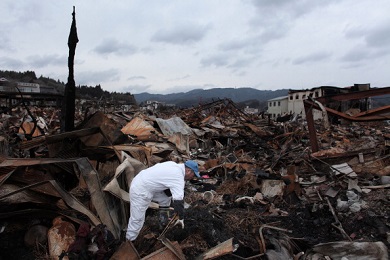 The following day, we were able to safely reunite with my husband and son at our house, which had escaped being washed away by the tsunami. The sense of relief was short-lived; we immediately had to busy ourselves clearing up the damage in our home, which was without electricity or water. Eventually, our house became the designated site for relief supplies that arrived from the Soka Gakkai.

The earthquake had changed Kesennuma completely, turning it into a wasteland of rubble and wreckage. Mountains of rubble obstructed the roads, making driving impossible. The phone lines were down too. There was no way to contact anyone and confirm their safety.

Mitsuo Saijo, our Soka Gakkai district leader at that time, volunteered to take on the responsibility of checking on members’ safety, saying, “The roads are strewn with rubble and are extremely dangerous. We’re also experiencing aftershocks, so I will go. I’m wearing safety boots, so I’ll be fine,” and he set off to confirm our fellow members’ whereabouts. What would normally be about a 10-minute journey on foot took close to two hours because of the rubble. Mr. Saijo walked around the area looking for evacuation points where the members might have sought shelter. Each time he was able to locate and reunite with any of them was an occasion of both great joy and relief.

With each passing day, I heard more about the effects of the earthquake. Each time I heard that friends or family members of my children’s classmates had passed away, my heart ached thinking of the family that was left behind. The sorrow of suddenly losing a family member or loved one, without any warning, is unimaginable.

I was women’s chapter leader in our local Soka Gakkai organization at the time, but I was incapable of encouraging anyone. All I could do was be by their side and listen to them. At a loss for what to do, I just prayed every day.

In the beginning, our organization’s newspaper, the Seikyo Shimbun, couldn’t be delivered to us, but we were encouraged by Soka Gakkai leaders who brought several issues with them for us to read, as well as sharing President Daisaku Ikeda’s messages with us.

“Nothing can destroy the treasures of the heart.” How much courage have I taken from this one sentence! Each time Ikeda Sensei sent us messages of encouragement, I could feel that he was holding us Tohoku members in his heart. The thought that he was praying for us gave me strength and the determination not to be defeated. I feel I have survived until now because of him urging me to go on. I have an overwhelming sense of gratitude. 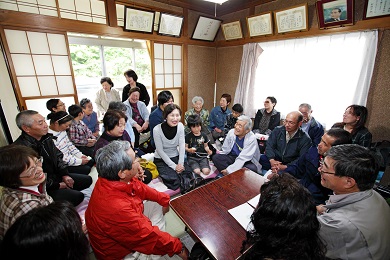 Two months after the earthquake, we were finally able to hold our local Soka Gakkai discussion meeting. Some 20 members gathered, many coming from distant evacuation centers. It was heartwarming just seeing everyone’s face and knowing they were safe. At the meeting, I was holding back my tears for some time, but as soon as we started to chant, I just couldn’t stop crying. I felt so overwhelmed that I couldn’t find my voice. I cried once again as I listened to each person describe their circumstances. I feel a profound sense of gratitude to be part of a community bound together with a shared determination to not be defeated, supported by the encouragement of a mentor.

I have learned a lot about faith from my fellow members in Kesennuma.

An elderly woman lost her daughter in the tsunami, leaving behind a child still in elementary school. Taking her grandson into her personal care, she put all her energy into raising him. I never heard her utter a word of complaint; instead she always looked bright, with a smile on her face. Her grandson went on to graduate from high school and entered a vocational school, moving one step closer toward realizing his dream.

Our comrades in faith in Kesennuma have simply lived each day exerting their utmost effort.

Another elderly woman lost her husband. In front of others, she always conducted herself bravely, never shedding a tear. Then, four years after the earthquake, she unexpectedly lost her son in an accident. Standing in front his coffin, she declared, “I won’t be defeated.” When I heard her utter those words from the depths of her heart, I felt as though I saw her true, inner strength as a human being, a strength emanating from genuine faith.

Later, I also lost my husband. He died after bravely battling pancreatic cancer for a year and four months. While he was hospitalized, many people came to visit, giving him powerful encouragement. Listening to them, I was also deeply encouraged and received strength from their words.

After my husband’s death, my son-in-law decided to join the Soka Gakkai, saying, “I promised Dad I would.” I was surprised by his decision, but it seems my husband had talked to him about this practice before he passed. This showed me that he had been fighting his illness until the very end with strength derived from faith.

Every time a grandchild was born my happiness increased. Now, I’m a granny with five grandchildren. I pray each day—on behalf of my husband as well—for their happiness and that each one of them will become a person who can contribute to peace in the world.

It’s been 10 years since the earthquake. I don’t believe that time can heal the pain. Just because 10 years have passed, it doesn’t necessarily mean there has been some significant change or that it’s a mark of progress. All I can say is that our comrades in faith in Kesennuma have simply lived each day exerting their utmost effort. With the spirit of “changing poison into medicine,” we have been moving forward little by little during these past 10 years, gradually transforming the suffering experienced from the devastating earthquake into happiness.

During this time, I have realized that prayer and encouragement are the driving force to move forward. That is why we are undefeated. 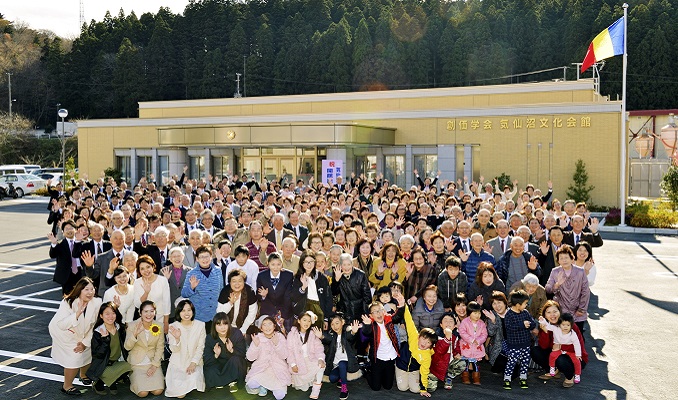 Adapted from the March 2021 issue of Daibyakurenge, Soka Gakkai, Japan.