Human Rights for All

Human rights belong to every one of us. No one can take them away. They are ours simply because we are human beings. 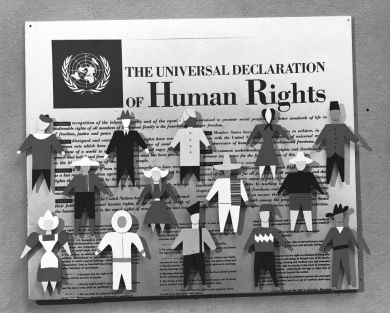 From the atrocities of World War II, humanity learned that peace and human rights are inseparable and that, as the foundation of peace, human rights must be guaranteed uniformly. Since then, through international collaboration and cooperation, countries have established rules and systems to protect and promote human rights as a basic condition. However, there still are many people, such as those who are robbed of their lives and freedom and those who are forced out of their homes, who are unable to live with the peace of mind and protections that human rights confer.

Raising awareness of human rights helps individuals become more sensitive about upholding their own rights and the need to protect the rights of others. The spread of this awareness helps prevent human rights violations; hence, the need for human rights education. For these reasons, promoting education and training in human rights is a key focus of the SGI (Soka Gakkai International)’s activities.

A central tenet of the Soka Gakkai is that a profound change in the heart of an individual can spark change in one’s community, society at large and, eventually, the world. Through its awareness-raising activities, the SGI strives to empower individuals to become catalysts for change in their local communities.

The SGI’s efforts for human rights education date from 1990. At his meeting in October of that year with African National Congress (ANC) Chairman Nelson Mandela, Daisaku Ikeda proposed several initiatives related to promoting human rights: holding an exhibition on the theme of human rights, arranging an anti-apartheid photo exhibition and sponsoring public lectures on human rights.

In 1993, the SGI launched the exhibition “Toward a Century of Humanity: An Overview of Human Rights in Today’s World,” which was shown the following year at the United Nations Office at Geneva in cooperation with the then Centre for Human Rights. As a resource supporting the UN Decade for Human Rights Education (1995–2004), the exhibition was viewed by more than 500,000 people, including many schoolchildren, at 40 venues in eight countries. 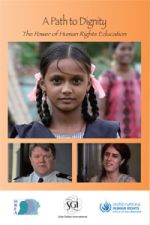 The SGI has since developed other innovative tools to promote human rights education.

The documentary A Path to Dignity: The Power of Human Rights Education, jointly produced by the SGI, Human Rights Education Associates (HREA) and the Office of the United Nations High Commissioner for Human Rights (OHCHR), portrays human rights education in practice in India, Australia and Turkey. While the specific issues in each case differ, together they convey the message that it is possible to change society and that change starts with the inner transformation of individual human beings.

A Framework for Human Rights Education

Since 2001, NGOs have become increasingly vocal in their advocacy of human rights education as an important global strategy toward strengthening respect for human rights. In August 2001, Daisaku Ikeda published a statement calling for a global framework for human rights education that would succeed the UN Decade for Human Rights Education. Focusing on influencing global policymaking at the former UN Commission on Human Rights, the SGI continued networking with many NGOs and other civil society actors, contributing to the process of UN General Assembly adoption on December 10, 2004, of the resolution that proclaimed the World Programme of Human Rights Education (2005– ) as the successor to the decade.

The SGI also joined with like-minded groups in proposing that youth be the focus of the fourth phase of the World Programme for Human Rights Education—a proposal that was adopted by resolution of the UN Human Rights Council on September 27, 2018.

In September 2018, to contribute to the goals of this new phase and to commemorate the 70th anniversary of the Universal Declaration of Human Rights, the SGI launched a website to provide an open-access interactive resource aimed at young people in the hope that it will assist them in claiming their rights and contributing to a better future for their communities.

The Soka Gakkai will continue its efforts in pursuit of dignity for all and the crucial work of constructing a culture of human rights.