SGI at the World Humanitarian Summit

From May 23 to 24, 2016, individuals and organizations from across the globe came together at the first World Humanitarian Summit (WHS), held in Istanbul, Turkey, to commit to reducing suffering from humanitarian crises. The SGI (Soka Gakkai International) co-organized an official side event on religious groups’ contributions to humanitarian response as well as an exhibition titled “Restoring Our Humanity” coproduced with the Asian Disaster Reduction and Response Network.

What were the key impressions or inspirations you took away from the World Humanitarian Summit?

Alexandra:The World Humanitarian Summit (WHS) was the first gathering of such a large and encompassing number of actors and stakeholders in the humanitarian field. What I found extremely interesting was how everyone engaged each other in very open and honest conversations—ready to go beyond their specific field of action, ready to engage in dialogue and to work together in partnerships. 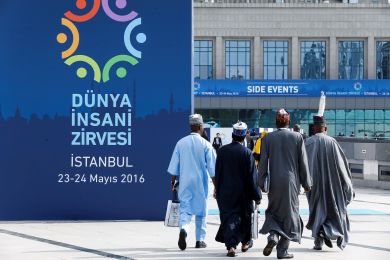 Many organizations shared informative examples of good practices. For instance, I really appreciated the recognition of the importance of education to empower people to build inclusive communities.

Elisa:In the midst of one of the most challenging humanitarian crises ever, the WHS represented a historic moment, bringing together UN agencies, governments, NGOs, intergovernmental organizations and the private sector as well as people affected by crisis themselves.

“One humanity, shared responsibility” was the principle underpinning the summit. Different identities, religious beliefs and customs shape “one humanity,” and we all share the responsibility to ensure that the inherent dignity of every individual is respected. Many side events focused on the importance of putting people in need at the center of humanitarian response, emphasizing the fact that individuals affected by crisis are not only vulnerable parties but also key actors with whom to engage fully.

It was truly inspiring to hear examples of how different FBOs came together to foster solid partnerships and cooperation in humanitarian responses. Azza Karam, coordinator of the UN Inter-Agency Task Force on Religion and Development, highlighted the key role of such partnerships.

Nobuyuki:What impressed me most was that the summit highlighted the localization of aid. This was emphasized at several sessions and side events. A new target of directing 25 percent of humanitarian resources to local and national responders by 2020 was agreed upon, a sharp rise from the current 0.2 percent.

I guess this focus on the localization of aid derived from consultations held before the summit, including nine regional gatherings across the world to which affected people were invited as well as online gatherings that anybody could access. Such occasions gave affected people and local activists the opportunity to raise their voices.

As a result, the summit became a conference of all the stakeholders rather than one dominated by government leaders and big organizations. I believe this is a new departure for a collaborative global effort.

In light of emerging localization, it was only natural that the role of FBOs and religion was officially recognized at the summit, because local faith groups and leaders often play key roles in local communities. I hope such discussions will be further developed.

What do you consider the SGI’s particular contributions to the humanitarian field to be?

Alexandra:Based on the principle of respect for the dignity of life, which is also a core humanitarian principle, the SGI has shown examples of how the empowerment of a single individual, who decides to act for the betterment of his or her community, can make a crucial impact. It has shown how those who are generally considered vulnerable, such as youth and women, are actually very powerful actors.

Elisa:The SGI’s humanistic approach—its focus on individual empowerment and its belief in the inherent dignity and limitless possibilities of each person—can make a unique contribution to the humanitarian field.

In fact, this goes beyond the material aspect of humanitarian aid to enabling people affected by conflict and natural disasters to bring forth courage and hope, becoming the first agents of change in their own communities.

In addition, by creating bridges of friendship and trust, the SGI plays a key role in expanding partnerships with other organizations working together to restore the principle of humanity to the core of humanitarian response.

Nobuyuki:In reality, large numbers of people around the world still have little idea about humanitarian issues. Our exhibition “Restoring Our Humanity” is an excellent tool for raising awareness among the public. As an organization with a broad grassroots network, the Soka Gakkai is committed to spreading the message of “Leave no one behind” and helping involve more people in the cause.