Promoting the Voices of Young Faith Leaders at COP27 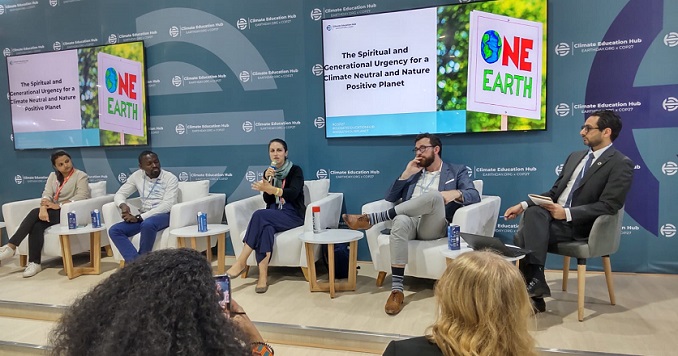 Alexandra Masako Goossens-Ishii, SGI representative to the UN, comments, “Although the loss and damage due to climate change is finally higher on the agenda, deep divisions remain on how to address them. I believe faith communities have a unique moral voice in calling on world leaders to take the decisions needed to move to a just transition for all humanity, while also embodying a resilient spirit, providing community support and moving towards a just transition at the local level.”

To counter youth tokenism, Lucy Plummer of SGI-UK led a November 15 side event that modeled genuine participation and showcased the voices of faith-based youth, mainly from the Global South, who are speaking out about climate-related suffering and leading action by faith groups. David N. Munene of co-organizer CYNESA (Catholic Youth Network for Environmental Sustainability in Africa) stressed that young people of faith can contribute most when they act in solidarity with others, and participants emphasized that the world needs the idealism and positive vision of youth.

On the same day, SGI cosponsored a workshop on REDD+, which aims to reduce emissions from deforestation and conserve forests, together with the International Tropical Timber Organization (ITTO). Cécile Ndjebet of REFACOF, the local partner in a joint Soka Gakkai and ITTO project that supports reforestation efforts by rural women in Togo, highlighted the crucial role of women at the grassroots throughout Africa.

On November 14, Nobuyuki Asai, Executive Director of the Soka Gakkai Peace Committee, joined a panel at the Japan Pavilion on the need to accelerate action toward net zero where members of the Japan Climate Initiative (JCI), a coalition of Japanese non-state actors, shared their efforts to achieve the 1.5°C target, and emphasized the importance of climate justice.

Soka Gakkai members around the world are taking action, convinced that even in the face of the insurmountable odds presented by the climate crisis, every individual’s contribution can lead to positive change. As SGI President Daisaku Ikeda has stated, “When youth stand up in solidarity, confident that they can determine the future, this fresh awareness and momentum will surely become the driving force toward a brighter future.”

The Soka Gakkai is a global community-based Buddhist organization promoting peace, culture and education with 12 million members around the world. The SGI is an NGO in consultative status with the UN ECOSOC since 1983.