Tokyo, Jun 24, 2022: From June 21 to 23, at the historic First Meeting of States Parties (1MSP) to the UN Treaty on the Prohibition of Nuclear Weapons (TPNW), held in Vienna, Austria, the Soka Gakkai International (SGI) joined civil society groups calling for universalization of the treaty; cohosting workshops highlighting perspectives of affected communities and youth.

Hirotsugu Terasaki, SGI Director General of Peace and Global Issues, commented, “At this time of existential threat, all who gathered here have categorically asserted that nuclear weapons are morally and legally unacceptable. We welcome the Vienna Declaration and Action Plan and are determined to continue our efforts to strengthen the effectiveness of this groundbreaking treaty.”

The voices of hibakusha were a galvanizing force throughout the discussions. On June 21, the SGI cosponsored a side event addressing victim assistance, environmental remediation and international cooperation in line with Articles 6 and 7 of the treaty with the Ministry of Foreign Affairs of Kazakhstan, the Permanent Mission of Kiribati to the United Nations and the Nuclear Age Peace Foundation.

Speakers included survivors of nuclear testing in Semipalatinsk, Kazakhstan, and a youth activist from the Marshall Islands, site of 67 nuclear tests. Rebecca Jovin, Chief of Office, United Nations Office for Disarmament Affairs (UNODA) at Vienna, speaking on behalf of Izumi Nakamitsu, UN Under-Secretary-General for Disarmament Affairs, highlighted the profoundly harmful effects of over 2,000 nuclear tests conducted since 1945 stating, “The in-person participation of communities affected by nuclear testing serves as a real-life reminder as to why we must pursue the complete elimination of nuclear weapons.”

Also on June 21, at the Youth MSP, the SGI and the Italian Senzatomica anti-nuclear campaign held a workshop on grassroots educational movements. Youth discussed reshaping the discourse around nuclear weapons and alternative educational approaches that empower learners. 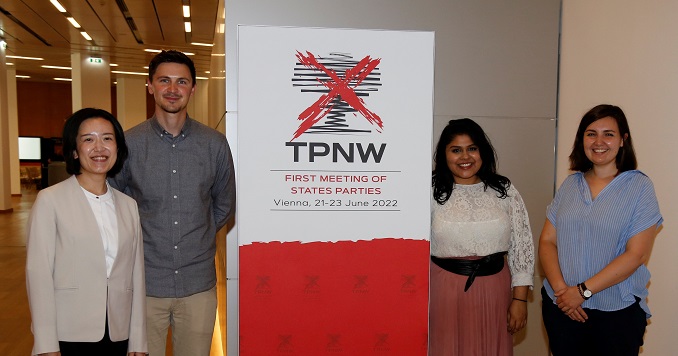 Watch a short video on SGI’s activities at 1MSP, including youth perspectives from the workshop held by the SGI and Senzatomica

Participant Sanya Rajpal of SGI-UK commented, “We have to break down the logic which leads to nuclear weapons and all forms of structural violence and empower individuals to transform this in their own lives and then the world.”

The SGI and the International Disarmament Institute of Pace University also coauthored a working paper on peace and disarmament education highlighting the critical role of education in universalizing the TPNW.

A Joint Interfaith Statement, introduced by Olivia Baro, youth representative of the Pacific Conference of Churches, in a session on June 22, also urged wider ratification of the treaty. It was signed by the SGI and a total of 144 organizations from diverse faith traditions.

The Soka Gakkai International (SGI) is an NGO in consultative status with the United Nations ECOSOC. The Soka Gakkai is a global community-based Buddhist organization with 12 million members that promotes peace, culture and education and has worked for the abolition of nuclear weapons for over 60 years.