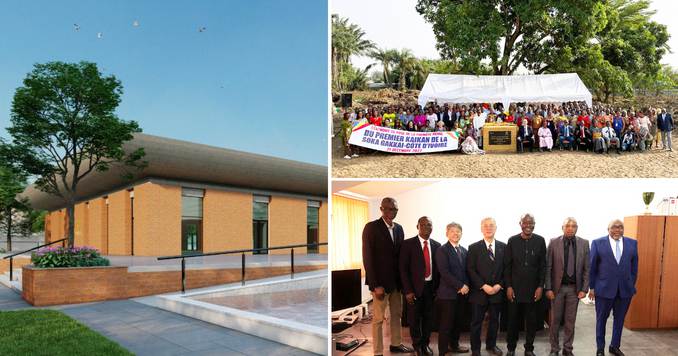 On December 31, a groundbreaking ceremony for a new center in Abidjan, Côte d'Ivoire was held. The ceremony was attended by members from eight neighboring countries, including Togo, Benin and Senegal. President Daisaku Ikeda sent a congratulatory message. The new center will consist of a 1,700-seat auditorium and a two-story building and will be one of the largest Soka Gakkai facilities in Africa. On January 4, a delegation made up of Takemi Sugai, advisor to the Soka Gakkai in Africa, Bi Drigoné Jonas Toboe, vice general director of Soka Gakkai Côte d'Ivoire, Masahiro Hayashi, director of the Africa Division of the SGI Coordination and Liaison Office, and other Soka Gakkai representatives met with Messamba Bamba, director general of the Department of Faith-Based Organizations of the Ministry of Interior and Security of Côte d'Ivoire. On the same day, the delegation also visited Amadou Coulibaly, minister of Communication and Digital Economy.