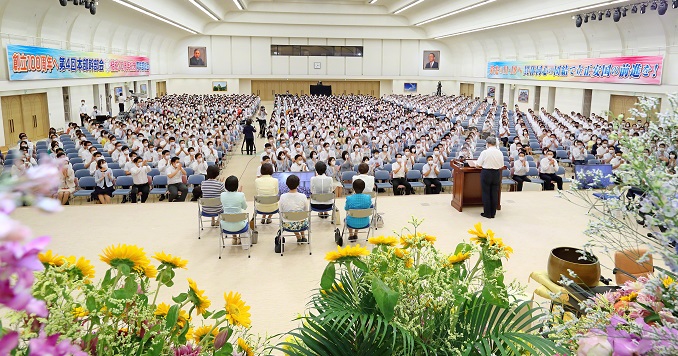 On July 7, the fourth Soka Gakkai Headquarters Leaders Meeting of the decade leading to the organization’s 2030 centennial was held at the Tokyo Toda Memorial Auditorium in Sugamo. The meeting commemorated the 70th anniversary of the founding of the Young Men’s and Young Women’s Divisions. President Daisaku Ikeda sent a congratulatory message emphasizing the importance of courage in facing obstacles and pursuing a more profound way of life. He described faith as ultimately being courage and called on the youth to summon theirs in order to overcome hardships and lead the way in creating a more positive future for humanity in the coming decade. The meeting included a prerecorded collaborative performance by youth taiko drum groups from different parts of Japan as well as the faith experiences of youth members.