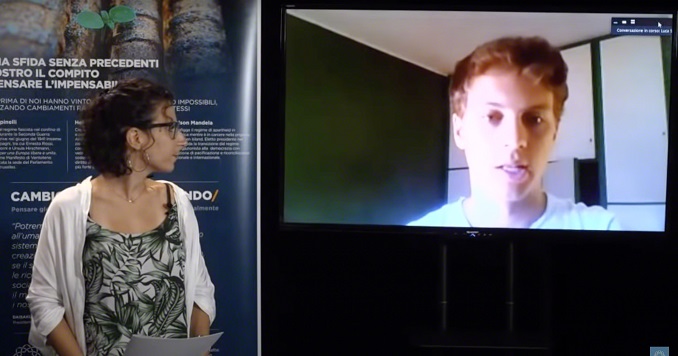 At the opening ceremony [© Seikyo Shimbun]

On September 25, Soka Gakkai Italy launched the “Inheritance of Life” exhibition on climate change, cosponsored by the Ministry of Ecological Transition and prior to the Pre-COP meeting on climate change held in Milan. The exhibition was created based on SGI President Daisaku Ikeda’s 2012 environment proposal "For a Sustainable Global Society: Learning for Empowerment and Leadership" and includes quotes from environmental activists and examples of positive initiatives by citizens. It emphasizes the importance of each individual acting as an agent of change and is part of the "If I change, the world will change" campaign launched by Soka Gakkai Italy in 2020 to contribute to the achievement of the Sustainable Development Goals (SDGs). At the online opening ceremony, video messages were introduced from Milan Mayor Giuseppe Sala, President of the Episcopal Commission for Ecumenism and Interreligious Dialogue of the Italian Bishops Conference Monsignor Derio Olivero and Assistant Director General of the Food and Agriculture Organization of the United Nations (FAO) Maurizio Martina, among others. President Ikeda also sent a congratulatory message.