The Simultaneity of Cause and Effect 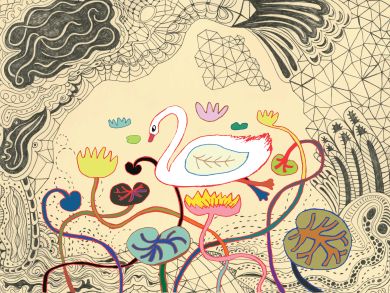 Buddhism teaches that the law of cause and effect underlies the workings of all phenomena. Positive thoughts, words and actions create positive effects in the lives of individuals, leading to happiness. Negative thoughts, words and actions on the other hand—those that in some way undermine the dignity of life—lead to unhappiness. This is the general principle of karma.

In Buddhist teachings other than the Lotus Sutra, Buddhist practice is understood as a gradual journey of transformation. This is a process in which, over the course of many lifetimes, the essentially flawed and imperfect common mortal gradually molds and transforms him- or herself into a state of perfection—Buddhahood. It is a process of self-perfection that requires painstaking efforts to accumulate positive causes while striving to extinguish the effects of past negative causes and avoiding new negative causes.

In Nichiren Buddhism, however, the attainment of Buddhahood is governed by a more profound principle of causality, as revealed in the Lotus Sutra.

The Lotus Sutra offers a radically different view of the human being and of the attainment of Buddhahood. In the perspective of the Lotus Sutra, delusion and enlightenment—the common mortal and the Buddha—are the two aspects, or possibilities, that are equally inherent within life, though life itself is in essence neutral. While the “default” human condition may be that of delusion, manifesting our Buddhahood does not require a fundamental change in our nature. In fact, the idea that Buddhahood is somehow remote from our ordinary reality is itself a delusion.

This difference between the pre-Lotus Sutra and Lotus Sutra views of enlightenment can also be explained with reference to the concept of the Ten Worlds. This concept describes our inner state of life at any moment in terms of ten “worlds,” from hell to Buddhahood, which we move between constantly depending on how we direct our life and respond to our environment. In the pre-Lotus Sutra view, common mortals carry out Buddhist practice in the nine worlds (cause) and eventually attain Buddhahood (effect). The nine worlds disappear completely, replaced by the world of Buddhahood.

The Lotus Sutra, on the other hand, clarifies that Buddhahood and the other nine worlds are each eternally inherent possibilities of life at each moment. Through faith and practice, the world of Buddhahood, which is otherwise dormant, is brought forth and the nine worlds retreat into a state of dormancy. This revolutionary perspective on “attaining” Buddhahood is expressed in the concept of the simultaneity of cause and effect. The nine worlds (“cause”) and the world of Buddhahood (“effect”) are in fact equally inherent potentialities existing simultaneously in our lives. The concept is symbolized by the lotus plant, which bears flowers (symbolizing the common mortal) and fruit (symbolizing Buddhahood) at the same time.

The difference between these two views of Buddhahood could be described using the analogy of a video game. The conventional view of the process of enlightenment is like a game character who gradually overcomes an array of inherent flaws, accumulating various powers and useful tools while successfully passing through to the advanced stages of the game.

In the Lotus Sutra’s view of enlightenment, the game character is from the beginning already in possession of all the full powers possible, and only requires a means to unlock them.

The practice of Nichiren Buddhism is one of manifesting the potential of Buddhahood here and now.

Chanting Nam-myoho-renge-kyo with faith in one’s inherent Buddhahood could be compared to activating the “code” that unlocks this potential. The practice of Nichiren Buddhism is one of manifesting the potential of Buddhahood here and now.

In real terms this means that when we harness the inherent power of our Buddhahood, we can surmount any difficulty and establish a happy and victorious path of life. Furthermore, as the fundamental orientation of our life becomes one of hope and compassion, even our weaknesses and failings can function positively, becoming a source of understanding and thoughtfulness toward others. This does not mean, though, that we completely and finally transcend our capacity for delusion.

Bringing forth one’s enlightened nature—characterized by courage, wisdom, compassion and life force—one is then equipped to engage fully with the problems of life, change reality for the better and make enlightenment an actuality.

Problems and challenges, in this sense, serve as a means for us to demonstrate the strength and reality of our enlightened nature and to inspire others to do the same. Buddhism is about living confidently and expansively here and now. The key component in this is faith in our inherently enlightened nature.

When we have full confidence in our Buddha nature and our ability to transform and triumph over any kind of suffering, problems become challenges to be welcomed rather than avoided. This sustained sense of confidence and determination in the face of difficulties is itself a manifestation of our Buddha nature and, in accordance with the principle of the simultaneity of cause and effect, assures our success in life.

Adapted from an article in the April 2013 issue of the SGI Quarterly.