The Ten Factors of Life

In many teachings of Buddhism, the Buddha is presented as a being whose abilities and wisdom far surpass that of ordinary people. The Lotus Sutra, however, completely overturns this perception, clarifying that ordinary people inherently possess the same qualities as the Buddha and are equal in their capacity to manifest life’s most profound and positive qualities. 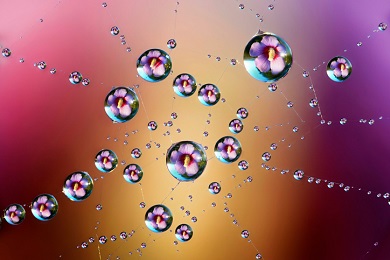 The “ten factors of life,” expounded in the second chapter of the Lotus Sutra, are a key component in the theoretical explanation of this truth. They analyze life in terms of the elements that are common to all phenomena. The ten factors form part of the larger, overarching theoretical system of “three thousand realms in a single moment of life” established by Zhiyi (the Great Teacher Tiantai) in the sixth century in China. This teaching forms the basis of the philosophy of Nichiren Buddhism and clarifies that the potential of Buddhahood is inherent in all things. This, the Lotus Sutra states, is something difficult to understand and to believe.

The ten factors are introduced in a passage from the sutra that reads: “The true aspect of all phenomena can only be understood and shared between Buddhas. This reality consists of appearance, nature, entity, power, influence, internal cause, relation, latent effect, manifest effect, and their consistency from beginning to end.”

Elements Common to All Life

The first three factors describe the basic framework of life. Appearance relates to physical features and attributes—what can be seen. Nature refers to those aspects of life that are essentially nonphysical—our inherent disposition and latent potential. Entity is life itself expressed as appearance and nature. If appearance is one side of a coin and nature the other, entity is the coin itself. All three aspects are inseparable.

The next six factors describe the functions and workings of life—the way in which the law of cause and effect functions in life. Power describes the potential to act or create an effect, and influence represents the action or effect produced when this inherent power is activated. Internal cause is the cause latent in life. Relation refers to the internal and external conditions that trigger the internal cause, producing a latent effect in the depths of life. The manifest effect is the perceivable result that eventually appears. For example, when a person with a tendency to become depressed (internal cause) suffers a disappointment (relation), this may trigger their depressive tendency (latent effect), leading to a state of depression (manifest effect). Their depressed state will affect others around them (influence). The strength of such influence is a function of their power.

The tenth factor, consistency from beginning to end, indicates that all of the other nine factors are interrelated and perfectly consistent in expressing the same condition of existence at any given moment. The manifest effect of depression, in the example above, is consistent with the internal cause and relation, etc. of the hellish state of depression, which will be noticeable in the person’s appearance and the waning of their energy. A similar consistency would apply to any other condition, such as joy, anger or compassion.

The tradition that Nichiren Buddhism belongs to categorizes all such conditions into ten life states, or “Ten Worlds,” from hell to Buddhahood that are equally inherent in all people. These ten worlds define the entire spectrum of life. All life and phenomena at any moment manifest one of these ten worlds—there is no expression of life apart from the ten worlds. In the life state of hell, life is frustrated and filled with suffering, in the life state of Buddhahood, life is filled with wisdom, compassion and boundless possibility. Life manifests these varied potentials (the ten worlds) and is synonymous with what Nichiren termed the Mystic Law or Myoho-renge-kyo.

Ordinary people inherently possess the same qualities as the Buddha.

The ten factors explain the consistent way in which cause and effect functions in people’s lives to give rise to these different life states. Nichiren Buddhism explicitly expounds the law of cause and effect for manifesting the life state of Buddhahood. In other words, anyone who practices as Nichiren taught will experience the effect of Buddhahood, regardless of their capacity or circumstance.

The basis of this practice is to have faith that our lives themselves are the Mystic Law, inherently possessing the full spectrum of life’s possibilities.

As Nichiren writes: “When we revere Myoho-renge-kyo inherent in our own life as the object of devotion, the Buddha nature within us is summoned forth and manifested by our chanting of Nam-myoho-renge-kyo. This is what is meant by ‘Buddha.’”

Nichiren urged his followers to firmly commit themselves to their Buddhist practice and triumph amidst the harsh realities of life. His own life was one of fierce struggle and constant effort for people’s happiness. It is through such continuous practice for ourselves and others that we can more fully harness the wonderful workings of our Buddha nature, savoring an expansive life state of fearlessness and freedom.