Tokyo, Jan 26, 2021: On January 26, 2021, the 39th annual peace proposal by Daisaku Ikeda, president of the Soka Gakkai International (SGI) Buddhist association, titled “Value Creation in a Time of Crisis” was released, marking the anniversary of the founding of the SGI. 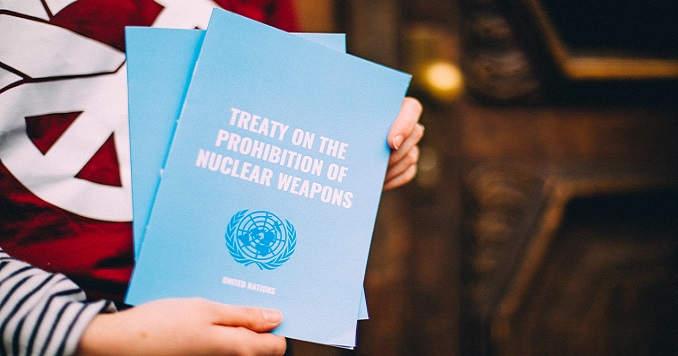 On January 22, 2021, the UN Treaty on the Prohibition of Nuclear Weapons entered into force, outlawing the creation, ownership and deployment of nuclear weapons by signatory states [© ICAN/Aude Catimel]

Ikeda calls for further global cooperation to address the key issues of our time: the COVID-19 pandemic, the climate crisis and the need to rid the world of nuclear weapons. These issues are not constrained by national borders and cannot be solved by any one government or organization alone.

He comments, “Our shared efforts to respond to the pandemic can serve as a foundation for generating global awareness of the essential role of human solidarity in transforming crises.”

Regarding the pandemic, he welcomes the COVAX facility that aims to ensure the global procurement and availability of COVID-19 vaccines. He proposes the holding of a high-level meeting at the UN to address COVID-19 and the convening of an online “beyond COVID-19” youth summit to discuss the kind of world young people want to see in the aftermath of this crisis.

Ikeda also highlights the economic devastation brought about by the pandemic, estimated to be threatening the livelihoods of 1.6 billion people—half the world’s workforce, and emphasizes the need to promote global social protection initiatives. He calls on the OECD to play a leading role here and in a transition to a green economy, where resources saved on military expenditure can be allocated to expanding healthcare and social services.

Consistent with his decades of action toward the abolition of nuclear weapons, Ikeda welcomes the UN Treaty on the Prohibition of Nuclear Weapons (TPNW), which entered into force on January 22, 2021, as a “pivotal event ushering in a new era” that will spur a paradigm shift in approaches to security. He calls on Japan to participate in the first meeting of the States Parties to the TPNW, to begin to create the conditions in which future ratification can become possible.

He proposes that a forum for discussing the relationship between nuclear weapons and the UN Sustainable Development Goals (SDGs) be held during the first meeting of States Parties to the TPNW.

At the Nuclear Non-Proliferation Treaty (NPT) Review Conference scheduled for August 2021, Ikeda also urges discussion on the true meaning of security in the light of crises such as the climate emergency and the pandemic.

He calls for the final document of the Review Conference to include a pledge of non-use of nuclear weapons and the freezing of all nuclear weapon development until 2025.

Soka Gakkai President Minoru Harada issued a statement welcoming the entry into force of the TPNW on January 22. The SGI has also cosigned an interfaith statement together with more than 170 other religious groups.

The Soka Gakkai is a global community-based Buddhist organization that promotes peace, culture and education based on respect for the dignity of life. The Soka Gakkai International (SGI) is an international association of the Soka Gakkai and an NGO in consultative status with UN ECOSOC. Every year since 1983, SGI President Daisaku Ikeda has issued a peace proposal on January 26 to mark the SGI’s founding.