Tokyo, Aug 6, 2020: To commemorate the 75th anniversary of the atomic bombings of Hiroshima and Nagasaki, the Soka Gakkai Buddhist organization has put out a statement calling for the elimination of nuclear weapons and the early entry into force of the Treaty on the Prohibition of Nuclear Weapons (TPNW). 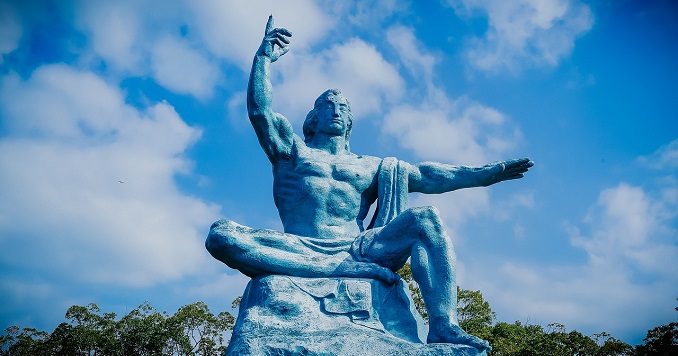 The Soka Gakkai pledges to exert all efforts for the complete elimination of nuclear weapons and also urges the Japanese government to move toward participation in the TPNW, stating, “At this deeply significant juncture, the government of Japan, the only country to have suffered atomic bombings during war, should announce its readiness to consider participation in the TPNW, thus positively shaping the discourse on the elimination of nuclear weapons within the international community.”

In the statement, Yoshiki Tanigawa, chair of the Soka Gakkai Council on Peace Issues, states, “In recent years, there are signs that a nuclear arms race among the nuclear-weapon states is again intensifying. At the same time, the global spread of the novel coronavirus has demonstrated that military force is incapable of resolving global challenges, compelling us to confront the question of what constitutes authentic security for human beings is.”

On August 6 and 8 respectively, the Soka Gakkai in Hiroshima and Nagasaki will hold online meetings to listen to testimonies of hibakusha, the survivors of the atomic bombings. Over the past year, youth members in these areas have continued to collect testimonies of wartime experiences, including those of hibakusha, aiming to publish the latest volume this fall. The Soka Gakkai in Japan will also hold an online youth summit toward the renunciation of war in September.

At the global level, the SGI (Soka Gakkai International), with around 200 organizations of different faith backgrounds, including Buddhist, Christian, Hindu, Jain, Jewish, Muslim and indigenous traditions, has signed a Joint Interfaith Statement on the 75th Anniversary of the Atomic Bombings of Hiroshima and Nagasaki. The statement affirms that “the presence of even one nuclear weapon violates the core principles of our different faith traditions and threatens the unimaginable destruction of everything we hold dear.” It lays out the environmental, health and economic consequences of a nuclear explosion and urges governments to ratify the TPNW. This is the twelfth such interfaith statement issued since 2014, supported by a growing number of faith groups.

The Soka Gakkai is a global Buddhist organization with 12 million members around the world that promotes peace, culture and education. The Soka Gakkai has worked toward the abolition of nuclear weapons for 60 years, since the Declaration Calling for the Abolition of Nuclear Weapons issued by second Soka Gakkai President Josei Toda on September 8, 1957.