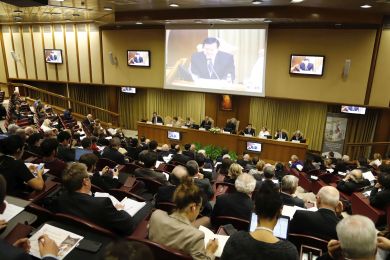 Tokyo, Nov 13, 2017: Hiromasa Ikeda, Vice President of the Soka Gakkai International (SGI) Buddhist association, joined other participants in stressing the moral case for ridding the world of nuclear weapons and urged increased efforts in awareness-raising at the conference on “Perspectives for a World Free from Nuclear Weapons and for Integral Disarmament” held at the Vatican in Rome on November 10 and 11.

Mr. Ikeda stated: “Nuclear weapons are dangerous from a security perspective. From an ethical and moral perspective, they are wrong. This renders them unacceptable in any hands. With the geopolitical risks of nuclear conflict rising to unprecedented levels, it is vital that this awareness be shared widely by all people.”

He also stressed the SGI’s educational focus on creating opportunities for dialogue. “This can foster a shared awareness that nuclear weapons—in any hands—are dangerous and wrong as a means of protecting the things and people we treasure.”

The SGI was one of 13 cooperating organizations involved in the conference hosted by the Vatican’s newly created Dicastery for Promoting Integral Human Development.

On November 10, conference participants were received in audience by His Holiness Pope Francis, who spoke of the “mentality of fear” created by nuclear weapons, saying: “Weapons of mass destruction, particularly nuclear weapons, create nothing but a false sense of security. They cannot constitute the basis for peaceful coexistence between members of the human family, which must rather be inspired by an ethics of solidarity.”

Several Nobel Peace Prize Laureates addressed the conference, including Beatrice Fihn, Executive Director of 2017 Nobel Peace Prize Laureate ICAN (the International Campaign to Abolish Nuclear Weapons), who thanked people of faith for their efforts toward the historic adoption of the Treaty on the Prohibition of Nuclear Weapons in July this year, saying: “This treaty is not the final step in our journey out of nuclear darkness, but the beginning of the end.”

Other Nobel Peace Prize Laureates who spoke included Muhammad ElBaradei, Jody Williams, Muhammad Yunus, Mairead Maguire and Adolfo Perez Esquivel. High-level representatives of the UN and the International Committee of the Red Cross and Masako Wada of Nihon Hidankyo, a victim of the atomic bombing of Nagasaki, also spoke.

His Eminence Cardinal Peter K. A. Turkson, Prefect of the Dicastery for Promoting Integral Human Development, closed the conference calling for ongoing dialogue and action, stating: “Everything is connected and everyone is connected. Together we can rid the world of nuclear weapons, invest in integral human development, and build peace.”

Other cooperating organizations were the Embassy of Italy to the Holy See, the Catholic Bishops’ Conference of Germany, the Catholic Bishops’ Conference of Japan, the Interdisciplinary Center “Sciences for Peace” (CISP) at the University of Pisa, Georgetown University, the Kroc Institute for International Peace Studies of the Keough School of Global Affairs, Mazda Motor Europe GmbH, Notre Dame University, the Nuclear Threat Initiative, the Pugwash Conferences on Science and World Affairs, Senzatomica and the Italian Union of Scientists for Disarmament.

The Senzatomica anti-nuclear weapons exhibition, originally created by the Istituto Italiano Soka Gakkai, was on display during the conference.

The Soka Gakkai International (SGI) is a community-based Buddhist association with 12 million members around the world. It has a 60-year record of peace education activities toward the abolition of nuclear weapons.