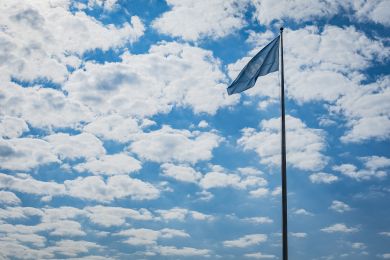 New York, Oct 18, 2018: On October 16, Faith Communities Concerned about Nuclear Weapons, a group of diverse faith-based organizations and individuals committed to a nuclear-weapon-free world, presented a joint statement on the occasion of the 73rd session of the UN General Assembly First Committee on Disarmament and International Security in New York.

The statement was introduced by Bruce Knotts, president of the NGO Committee on Disarmament, Peace and Security (NGOCDPS), during a side event “To Safeguard Future Generations—Multi-Faith Responses to the Threat of Nuclear Weapons.”

Endorsed by 14 groups and individuals of varied Christian, Quaker, Muslim, Hindu and Buddhist traditions, the statement urges the General Assembly to address the issue of disarmament not only from a military and political perspective but also as a “moral and ethical imperative.”

It reads: “As people of faith, we advocate for the right of all people to live in security and dignity; we seek to heed the commands of conscience and the call to justice. . . . The horrific destructiveness of nuclear weapons makes their abolition the only path to authentic human security.”

Dr. Emily Welty, vice moderator of the World Council of Churches (WCC), commented as follows: “Speaking collectively about how nuclear weapons violate the values at the core of our diverse faith traditions, working together to assist victims, restore the environment and demand that powerful governments care for human beings is what I believe we are called to do as people of faith.”

The statement is the tenth of its kind issued by the group since 2014. For the first time it also stresses the dangers posed by lethal autonomous weapons systems (LAWS), as well as the threat of a new international arms race.

SGI Executive Director for Peace and Global Issues Kazuo Ishiwatari commented on the statement: “No machine should ever have the right to decide on life and death. It is frightening to imagine any further advance in the automation of the processes controlling the targeting and launching of nuclear weapons.”

At the side event, the crucial role of faith-based organizations was stressed by Ambassador Thomas Hajnoczi of the Austrian Ministry of Foreign Affairs, Dr. Ira Helfand, co-president of International Physicians for the Prevention of Nuclear War (IPPNW) and speakers from various faiths.

The event, held at United Nations Headquarters in New York, was co-organized by NGOCDPS and the Permanent Missions to the UN in New York of Austria, Nigeria, Thailand and South Africa.

On October 17, together with the interfaith statement, the SGI submitted its own official statement to Marissa Edwards (Guyana), vice-chair of the First Committee on Disarmament and International Security. Ms. Edwards expressed her appreciation for the efforts made by faith communities and conveyed the statements to the chair of the First Committee, Ambassador of Romania to the UN H.E. Ion Jinga.

The SGI statement highlights: “The struggle to eliminate nuclear weapons represents a crucial opportunity for humankind to recover long-threatened qualities of agency, dignity, freedom and solidarity. These quintessentially human qualities can be effectively deployed in the resolution of the pressing, planetwide challenges we face.”

The Soka Gakkai International (SGI) Buddhist association links over 12 million practitioners around the world. Rooted in the philosophy of respect for life, it has been engaged in efforts to promote the abolition of nuclear weapons for 60 years.