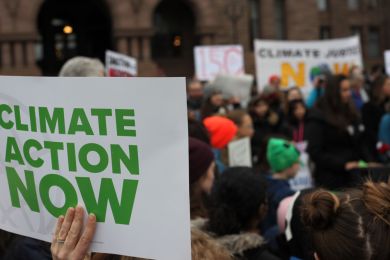 [Photo by Jasmin Sessler on Unsplash]

On September 21, two SGI representatives were among 500 delegates attending the UN Youth Climate Summit at UN Headquarters. Koichi Kabasawa, 27, Soka Gakkai Japan student division leader, commented: “I was privileged to be part of this historic summit. Now I know youth have the power to make a difference. We must go home and take whatever action we can.”

The SGI hosted an event at the Salvation Army Auditorium on September 23, where the results of a survey carried out by SGI student members in Japan, the UK and the US on awareness of the Sustainable Development Goals (SDGs) and climate change were presented. Announced by Koichi Kabasawa (Soka Gakkai Japan), Amelia Gonzalez (SGI-USA) and Scott Hartley (SGI-UK), the findings showed differences in the specific SDGs students in the three countries were most interested in.

Less concern regarding climate change and clear gender differences was evident in the Japanese results. Respondents included 3,560 young people in Japan, 131 in the US and 109 in the UK.

Ramu Damodaran, Chief of UN Academic Impact, and Dr. Kusumita P. Pedersen of the Parliament of the World’s Religions commented on the findings, stressing that the role of youth is crucial in finding innovative approaches to achieving the SDGs.

On September 24, the Mapting app, created by the SGI and Earth Charter International to enable individuals to share their contributions to actualizing the SDGs, was introduced in the SDG Action Zone exhibition space at UN Headquarters. Winning entries from a Mapting photo competition on action to combat climate change were displayed.

First prize, an invitation to join the climate action events in New York, was awarded to Catalina Gomez Vives from Costa Rica. Her photo showed teenagers researching the impact of climate change on endangered leatherback sea turtles. She said, “It has been amazing to meet with other passionate activists from around the world and discuss ways to work better together towards our common goal.”

Consistent with its focus on promoting individual action, the SGI published an article “Winning the climate change challenge: What one person can do” in the Japan Times in the run-up to the UN Climate Action Summit.

An article titled “Climate Change: A People-Centered Approach” by SGI President Daisaku Ikeda was also published by IDN-InDepthNews on September 19.

The Soka Gakkai International (SGI) is a Buddhist network linking over 12 million people around the world dedicated to promoting peace, sustainability, culture and education.