“I Am Master of My Mind”: Unleashing the Power of Transformation in Prisons 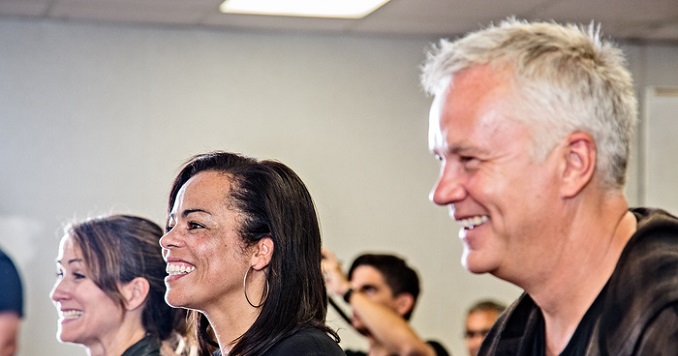 Sabra Williams is a Soka Gakkai member and a successful film and television actor, whose career includes credits in Mission Impossible III and recurring roles in ABC’s Injustice and CBS’s Three Rivers. After making her mark as an actress and TV presenter in the UK, Sabra moved to the US in 2002, where she created the Actors’ Gang Prison Project. Launched in 2006, the project employs highly physical theatrical techniques based on the emotive 16th-century Italian “people’s theater” culture of commedia dell’arte. The work has proved transformative for incarcerated people of the California prison system and has significantly reduced recidivism rates. Sabra was recently honored as a Champion of Change by the White House.

Please describe how you came to do this work with people in prisons.

I was with the English Shakespeare Company, and we had a program where we would bring Shakespeare’s plays into prisons and do workshops with incarcerated people. I was really amazed by the power of the arts to transform.

When I moved to Los Angeles in 2002, I encountered the theater company, the Actors’ Gang. Actor and director Tim Robbins is the artistic director. Experiencing the work, which was so physical and emotional, I thought it would be really good for rehabilitation. I told Tim I wanted to be part of their community outreach into prisons (I just assumed they had one). “We don’t have one,” he said. “Go ahead and start one.”

I had no idea how to do this or about the prison system in the US, which has a much higher gun-related crime rate than the UK, and in California in particular there are major gang issues. It took a year to set it up.

I asked three people to come with me, and with a rudimentary plan, we went into the prison. The first day was incredible. I remember being mind-blown by the transformation in the guys.

Then the recession happened, so all arts programs were taken out of prisons in California, including the facilitators who enabled us to work in the prisons. But I was so determined. We carried on for four years with no state funding. Because there were no other programs but ours at that time, it was like a petri dish—the only thing that could be making the changes we were seeing in the culture of the prison was our work!

How does the program empower people?

In prison people believe they have to be numb in order to survive. The only culturally acceptable emotion is anger. They have numbed themselves from other emotions. This affects not just them but their families and friends and the staff.

In this work, they start with a guided relaxation and then play theater games. Then they get “suited up” into the commedia dell’arte stock characters—they wear masks of makeup. They are then able to sieve their lives and issues through these characters. They might play the old miser Pantalone, the young lover or even women. And they play them in this highly emotional state—so all of these emotions that have been dormant for sometimes 20, 30, 40 years, they are now able to express them through the filter of a character. So they are the happiest person in the world, the saddest person, the most scared person in the world or the angriest person in the world, in a safe environment.

They are in a room with a bunch of people from other gangs, other cultures, other races and doing this ensemble-building work together. Over time, you see the changes.

We do 8- and 10-week sessions [recently the program also runs seven-day intensive sessions in more remote prisons and then hands the work over to the students to run their own class]. At first, people often join in for fun or to pass time. Then comes week three. I call this the drop-off week, as their emotional stuff starts coming up. The work starts holding a mirror up to them. They have to write a journal every day to track their progress. Emotional stuff starts to come up, and they start saying, “I’m sick” or “I’m really busy,” “I can’t make it.”

I am master of my mind, not the victim of my thinking.

The other guys are the ones who say, “You need to come” and “You’re a valuable part of the group.” The empowerment starts. This work makes them visible. It takes a lot of courage. It starts to give them back their power. Many of them say it is the first time they have felt like a human being again. I don’t allow them to say they made mistakes; they have to say they made choices. It’s all about taking responsibility for themselves. It’s terrifying for them, but it gives them back their power.

In the relaxation exercise, I use the affirmation, “I am master of my mind, not the victim of my thinking.” That is the title of this work. They have to use “I” statements, all these things reflect themselves back to themselves.

They start to understand their own potential, the effect they have on the world—that they have an effect. It can be positive or negative; it’s entirely up to them. They can’t blame, they can’t defer responsibility. It’s like a double-edged sword—the empowerment is exciting and amazing and also terrifying. They start to have empathy for others, including the staff. There are less violent infractions, and there is lower recidivism.

In the last week, we always do a final presentation, like an open workshop, not a show. We open the doors. They invite other incarcerated people to come and see, which is a major, major thing for them to do. We invite staff, politicians, funders. That is their culmination.

In 2014, we were invited to Washington DC to meet the US attorney general, Eric Holder. He is trying to change the prison system. Recently, he traveled to California to see the program for himself. Our program has become a model program in the country for rehabilitation.

These people are learning that they are empowered, but they are locked up. How does this affect their lives in prison?

Some of the guys we work with are very violent. The only response to difficulty they know is violence. We work with these four emotional states: happy, sad, angry, afraid. Science has recently shown that everything boils down to these four—what commedia dell’arte has known for 600 years. 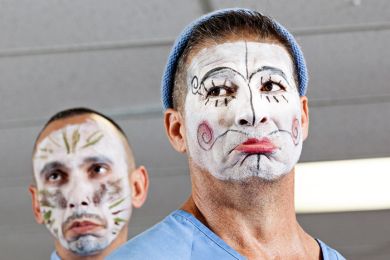 Often they will say to us, “This guy got up in my face today in the yard. Before, I would have punched him or stabbed him. I looked at the guy, and I saw Pantalone or one of the other characters, and I started laughing at him and how ridiculous the situation was. And the guy was completely shocked and walked away, and later I saw him in the yard and he said hello.”

That just showed me whatever I want to do in my life, I can do it!—Class Participant

These guys often join gangs at age nine or younger—they’ve never had a childhood, and suddenly they are playing like children. It’s incredible to see, really beautiful.

Tim and I always say that we get the most joy in our lives from being in prison. And what’s great is that we are doing the work on ourselves, too—we are transformed by doing it. I certainly have become empowered as a woman, as an actor and as an activist through doing this work. It has profoundly changed my life.

They always say by the end of the session, “The guys in this group are my brothers.” The change is so profound and so fast. What I’ve learned is that humans really do want to change; humans want to live valuable lives. They just don’t think it’s an option most of the time. When you give people a viable option, they take it.

What is the difference between power and empowerment?

I feel that power is based on ego; the ego comes first. In empowerment I feel like you are able to subsume the ego in the quest of creating value. It takes so much courage. In the last few years, doing this work has empowered me as an artist, doing my work on stage and TV.

In an Actors’ Gang production of Shakespeare’s Midsumm.er Night’s Dream recently, I was playing two queens, Hippolyta and Titania. One is an Amazon—and I’m 5 foot 3!—and the other is a fairy queen. Trying to take the stage as these queens was so difficult. I had to face my weakness and my lack of power. I am trying to always apply what I tell our students.

So on the one hand, I was working with the incarcerated people, seeing them transforming themselves. Then over here I was working, myself, as an actor. In my Buddhist practice I was trying to accept my power and not be scared of it, trying to be able to use it to create value.

I was finally able to break through with playing these two queens. I could stand there on stage and embody the power they both have. It was an extraordinary coming together of everything in my life. 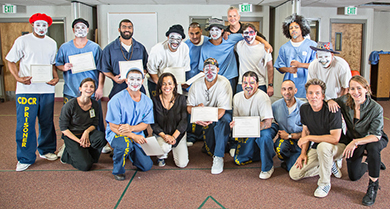 Watch a short video of the project here.