Advancing with an Undefeated Heart 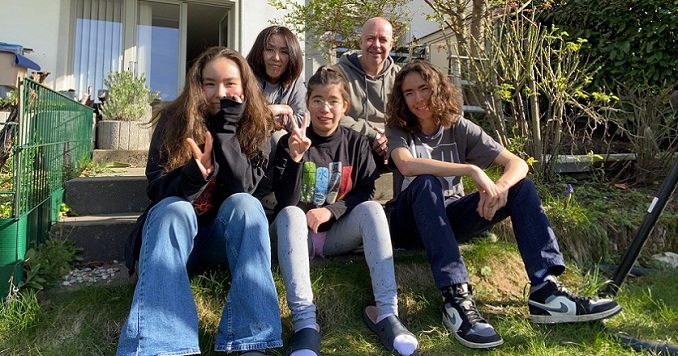 Fabian (back row, right) with his family [Photo courtesy of Fabian Boenke]

Life takes a sudden turn when Fabian Boenke from Germany, finds out his newborn daughter is diagnosed with a genetic respiratory disorder. Rather than succumb to doubt and despair, Fabian demonstrates what it means to have an undefeated spirit.

I live with my Japanese wife and our three children in Germany. I encountered Buddhism through my wife nearly two decades ago. Up until 2011, our life had been progressing quite normally. We had two children, who were going to the Japanese kindergarten, a new business and were awaiting the birth of our third child. We had our life planned out. As soon as our eldest child completed the ninth grade, we were going to move the whole family to Japan. There, the children would continue their schooling in the Japanese school system, and we would have opened up a shop or made arrangements to run our business from Japan. Everything turned out completely different, however.

On December 21, 2011, Sorane was born. In the delivery room, I got my first look at our newborn daughter, when suddenly, she turned blue in the face. A doctor was called, and he took her away immediately. Without any explanation, my wife and I were left in the room not knowing what had happened. Later on, we were informed that they needed to keep her in the hospital so that they could find out what was going on with her.

The following day, the doctor ventured a guess that she could have congenital central hypoventilation syndrome (CCHS), also called Ondine’s curse, a genetic respiratory disorder that can require lifelong ventilatory support during sleep. Later on, the doctor’s initial diagnosis was proven right, and our life was forever changed.

Adapting to a New Life

For three months our little girl was in the ICU. She had a tracheostomy, a procedure to create an opening in the windpipe at the front of the neck to help her breathe. At the hospital, we were constantly told that she could die at any time, and we shouldn’t have high hopes for her survival. Pity came from everywhere. I recall an incident when a doctor shared his concern with me that my wife may not understand the severity of the situation because she was always cheerful. I replied that my wife was in fact the only one who evaluated the situation correctly. Neither of us felt, for a single moment, that fate had dealt us an unkind blow. Our daughter was alive. Period.

We were certain that Sorane had a very special mission in life, and we feel honored that she chose us as her parents. That is our unique mission. What an honor for us! On the ward, they called her “die hard.” What we saw in her was the sheer resolve to be alive.

After we returned home with our daughter, we had to organize a caregiver who was going to become part of our life during the night and, for the first years, also during the day. In addition, it became clear to me that I would have to grapple with administrative bodies, health insurance and a lot of paperwork, something that I hated and had always avoided.

Holidays or going away on a quick trip were no longer possible due to the logistics of having to take numerous medical devices, such as the respirator, the pulse oximeter and suction equipment, which also required an enormous financial outlay. And at each moment, there was the danger that Sorane might stop breathing or that one of the devices she relied on would malfunction.

Despite having home care, my wife saved Sorane’s life on two occasions. The caregiver was there but didn’t know what to do.

When Sorane became old enough, she attended the Japanese kindergarten with her respirator and caregiver. She very much enjoyed it. Eventually, she was supposed to enter the Japanese school—as her siblings had done—and was especially looking forward to going to the same school as her sisters. We ordered a school satchel from Japan and also everything else a Japanese elementary school student needs. She proudly showed the satchel to everyone. She was so incredibly looking forward to her school years. And then, the rejection came.

Just before the beginning of the school year, a new headmaster came from Japan and implemented many changes. The school informed us by phone that they did not want to admit a disabled child. I was extremely angry that the decision had been made without any attempt to talk to us first.

After a couple of attempts to get her admitted to the Japanese school, we did what we always do: We accepted the situation and recognized what it really meant—the time had come to transfer all three children to the German school system. An elementary school nearby was quickly found for Sorane and for the older two. In retrospect, we realized this was actually the best move for our children. 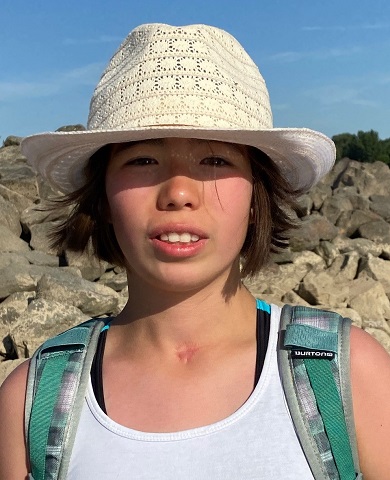 In 2018, when Sorane was seven, we felt we needed a new goal, since the continuous respiration by tracheostoma was not optimal for the lungs. She had always envied her siblings when they were playing in the bathtub and desperately wanted to be able to swim and dive like them. She decided that she wanted to be respirated by mask so that the hole in her throat could be closed, enabling her to swim and dive. She is a determined little girl. In 2020, at a hospital in Munich, the hole in her throat was successfully sutured, and she switched to a respiratory mask. A great step forward!

Following this, at an online CCHS support group, we learned about an international research project focused on finding a treatment that helps children with CCHS breathe autonomously. As it is a very rare disease, the existence of such a project surprised us. It is estimated that a new treatment may become available in 2028, given the necessary funding. This is going to be the next step in possible treatment. 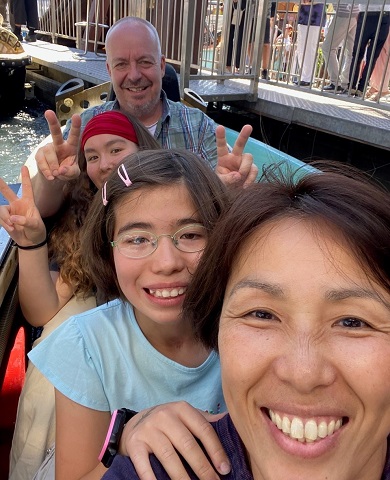 I am often asked why my family and I can deal with challenges in such a relaxed manner. To be honest, we don’t mull over our challenges at all. I think when we practice Buddhism, which means chanting Nam-myoho-renge-kyo and studying Nichiren’s writings, challenges are only challenges. Buddhist practice keeps us fit and ready to face challenges anytime. We never ask “Why?”

Why do I face life’s challenges? Because they are there. Difficulties exist for everyone. The difference is whether or not we embrace the difficulties and are able to create value from them.