Fighting for My Daughter: Finding My True Mission 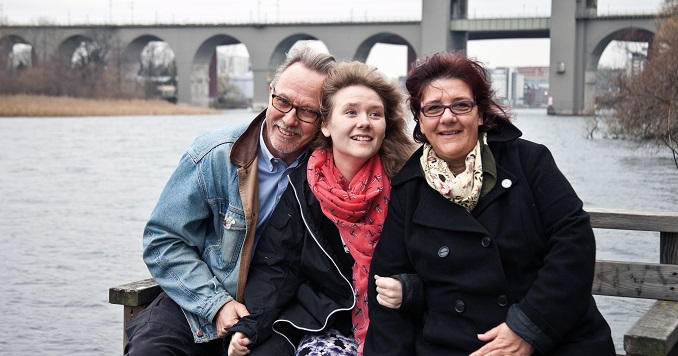 Rachel (right) with her husband and Roxanne

I began practicing Nichiren Buddhism in 1986 in the UK. Around the same time, I met my Swedish husband. In the early 1990s our children were born. Later, our daughter, who is now in her 20s, was diagnosed with autism.

It was Roxanne’s autism that brought us to live in Sweden in 2000, as my husband discovered a school in Stockholm teaching the special education we liked. But, as both that school and the next did not meet our expectations, we opted to educate her at home.

All we wanted was to continue with our education of choice and work toward her integration into mainstream schooling. As this was denied her, we challenged the local education authority for about two years. After two more difficult school placements, we found a school willing to give Roxanne a place, with the education that we sought.

This was the beginning of her having consistent training and her integration into a “normal” school environment, helping her cope with her social handicaps. We had won. However, during this time, Roxanne developed epilepsy and began to show symptoms of chronic intestinal problems.

It was also during this time that my husband came up with the crazy idea of establishing our own school for nonverbal children with autism. With my daughter’s general well-being swinging like a pendulum, I turned to my Buddhist practice and began chanting a lot about her future and how I could find new ways to improve her health. I studied Daisaku Ikeda’s writings and became active in the Soka Gakkai.

With my daughter’s general well-being swinging like a pendulum, I turned to my Buddhist practice.

In 2011, my husband and I applied for permission to open our school for nonverbal children but were turned down. I continued to chant that permission would be granted when we applied again. Roxanne finished her basic schooling. Sadly, there were no high schools that could supply the education she was used to, so we went back to homeschooling her.

For many years, Roxanne had shown sudden aggressive behavior, which I connected with her experiencing stomach pain. She would spend up to five hours or so in the evening rocking back and forth, nursing her lower abdomen. I still needed to do more about Roxanne’s physical problems, which (to my shame) I had not clearly recognized before. I decided to chant to find a solution.

In the spring of 2012, I heard about an open forum on autism in London, UK. At the forum I was given information about an organization called Treating Autism. Here I found out more about the physical problems that autistic people suffer from, which are normally overlooked by the medical profession. This strengthened my resolve to find the best help for Roxanne.

At a Treating Autism conference that year I met other parents who were treating their children with dietary intervention and biomedicine; most of them had experienced the same problems.

Later, I made contact with an autism treatment center in Edinburgh, Scotland, and tests showed that Roxanne was suffering from an imbalance in gut flora. I began to apply the gluten-free/casein-free diet and followed the suggested biomedical treatments, and she gradually began to heal.

After much chanting, I became more aware of my true mission, my unique purpose—to help people with autism in Sweden—and that I was already fulfilling it. I resolved that my school would be established by November 18, 2013—the anniversary of the founding of the Soka Gakkai.

In June 2013, I attended another Treating Autism conference, titled “Changing the Course of Autism: The Science and Intervention.” Here, I met some core medical leaders in the field of autism research, and the knowledge I came away with made me very hopeful.

The same year, our school opened and for two successful terms offered high school education. However, the education authorities began to shut down many independent (free) schools, and as we were in our infancy, we were the first in the firing line and got closed down. Our appeals were ignored.

The upside of this was that I found a new pedagogue whose methods are still being researched and who has already experienced success with those who are nonverbal with autism. The whole experience has fueled my passion to fight harder for my daughter and be a strong voice for those who have no chance to be heard and are still very much discriminated against.

In January 2014, I gave a short presentation at the University of Oslo’s Norwegian Centre for Human Rights on the physical problems associated with autism. In many countries, profound changes are taking place with medical research, and early education and dietary intervention are making huge positive impacts on the lives of autistic people. I also stressed the importance of autistic people having access to proper medical intervention.

After this meeting, I made the determination to expand my knowledge about dietary intervention and biomedicine in autism and give them a voice in Sweden. My vision is already in place, and I am using my website and personal blog to open up a path for information (mainly geared to parents).

I believe that Roxanne and I have shown the power of Buddhist practice and have proved that people with even severe autism also have the potential to acquire new skills, develop and fulfill their unique missions. I believe that she and I have chosen this mission together. Daisaku Ikeda writes:

“It all comes down to you . . . Confront reality, look it squarely in the face, and with guts, wisdom and strength, challenge everything that lies ahead of you.”