Everything You Treasure Exhibition Held at International Islamic University Malaysia

In a joint initiative by Soka Gakkai Malaysia (SGM) and the International Islamic University Malaysia (IIUM), the Everything You Treasure—For a World Free from Nuclear Weapons (EYT) exhibition, created by SGI (Soka Gakkai International) in collaboration with the International Campaign for the Abolition of Nuclear Weapons (ICAN), was held at the foyer of the Dar al-Hikmah Library in IIUM Gombak campus from August 6 to September 13. The exhibition was also held with the aim of creating greater awareness of the importance of peace and the abolition of nuclear weapons.

In his remarks, SGM Deputy President Johnny Ng Teck Sim emphasized Daisaku Ikeda’s tireless efforts for peace and hoped that through the exhibition more people would learn about the dangers of such weapons and be enabled to take part in abolishing them, ensuring that such a tragic history would never be repeated.

IIUM Rector Prof Emeritus Tan Sri Dato’ Dzulkifli Abdul Razak delivered a speech where he related his late father’s experience of surviving the atomic bombing of Hiroshima and the vast devastation and horrors that he had witnessed in the aftermath. His late father was a student at Hiroshima University. He also spoke about the suffering that the victims undergo even after 74 years have passed. The rector urged the audience to find peace within themselves first as this would allow them to gain happiness and to ensure that no nuclear bombs would ever be employed in the future.

Mr. Hiroyuki Orikasa, deputy chief of mission and minister counsellor of the Embassy of Japan in Malaysia was on hand to officiate the EYT exhibition on August 6—the anniversary of the atomic bombing of Hiroshima. In his speech, he commended the SGI for co-producing this important exhibition and for bringing messages of peace to numerous locations, widely reaching out to various peoples around the world and passing on such knowledge to future generations. Having worked in war zones before, he pledged that Japan would do its utmost to build a world free from nuclear weapons. 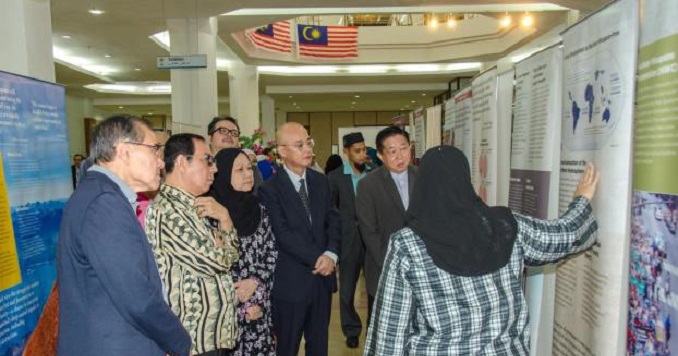