The SGI (Soka Gakkai International) participated in the 63rd session of the Commission on the Status of Women (CSW63) from March 11 to 22, 2019, which gathered over 7,000 civil society representatives and delegates in New York. Based on the CSW63 priority theme, the SGI organized a parallel event titled “Young Women’s Leadership for Inclusive Social Protection Systems” co-sponsored by the Canadian Voice of Women for Peace, Footage Foundation, Global Movement for the Culture of Peace, Global Network of Women Peacebuilders, Global Sunrise Project, RESURJ, SPECTRA Feminists Rwanda, and the Youth Empowerment and Leadership Organization.

The event, attended by over 150 people at the Church Center for the United Nations, consisted of a roundtable discussion moderated by Ivy Koek of the SGI. Six speakers from Afghanistan, Canada, Rwanda, South Sudan and the US demonstrated the power of stories through their work with young women leaders in education, gender training, peace and security, film and digital media.

They shared how young women’s voices are critical in building inclusive social protection systems, public services and sustainable infrastructure. To encourage reflection and participation, the audience was invited to talk in pairs, which led to lively discussions.

As a contribution to the negotiations on the agreed conclusions, the SGI signed on to two CSW63 joint written statements: one submitted by Graduate Women International and seven other NGOs; and another with three other NGOs focusing on the needs of young women which included topics such as equal pay, redistribution of unpaid care and domestic work, and improved health and safety. 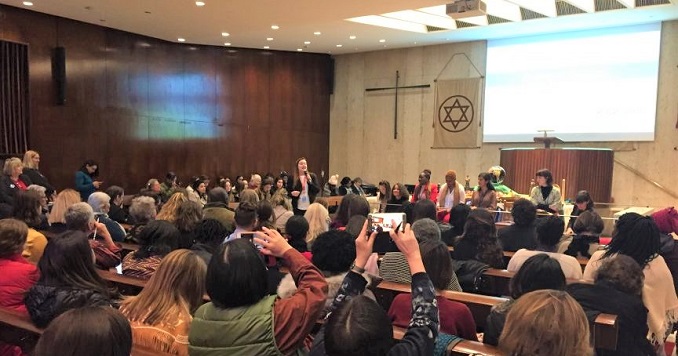