On September 21, two SGI (Soka Gakkai International) representatives were among 500 delegates attending the UN Youth Climate Summit at the UN Headquarters in New York as part of a weekend of events leading up to the UN Climate Action Summit 2019.

The SGI also hosted an event “Galvanizing Youth & Universities for SDGs & Climate Change: A Report on Youth Surveys Conducted in Japan, the UK & the US” at the Salvation Army International Justice Commission auditorium on September 23. Surveys carried out by student members in Japan, the UK and the US on awareness of the Sustainable Development Goals (SDGs) and climate change were shared by Koichi Kabasawa (Soka Gakkai Japan), Amelia Gonzalez (SGI-USA) and Scott Hartley (SGI-UK).

The findings showed differences in the specific SDGs that students in the three countries were most interested in. Less concern regarding climate change and clear gender differences were evident in the Japanese results. In the UK, there was highest interest in the SDG related to climate change. A high percentage of US respondents mentioned that their government and society were not making enough efforts to combat climate change.

Ramu Damodaran, chief of UN Academic Impact, said the SDGs are not new, that in fact the Declaration and Programme of Action on a Culture of Peace adopted 20 years ago encompasses what is contained in the SDGs. Dr. Kusumita P. Pedersen of the Parliament of the World’s Religions commented on the findings, stressing that the role of youth is crucial in finding innovative approaches to achieving the SDGs. Meanwhile, Ludovica Martella, a researcher and reporter on sustainable development and gender equality, emphasized how each sustainable development goal is interconnected and the importance of adopting comprehensive approaches to tackling climate change and other global challenges.

Respondents included 3,560 young people in Japan, 131 in the US and 109 in the UK. The SDG survey results from Japan can be read here 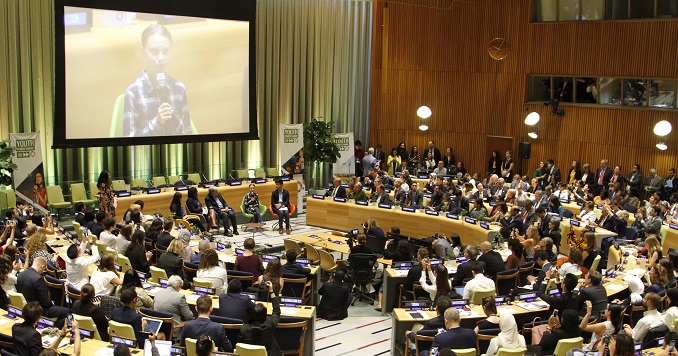