In September the International Committee of the Red Cross (ICRC) held a global conference titled “Reducing Suffering during Armed Conflict: The Interface Between Buddhism and International Humanitarian Law (IHL)” in Dambulla, Sri Lanka in collaboration with a team of leading international Buddhist scholars and legal experts. Over 120 participants gathered and exchanged their views.

Overall, several people remarked that IHL’s basic principles are resonant with the Buddhist concept of the dignity of life, and that Buddhism is explained in terms of combatants’ codes of behavior and in its responses to mental illness caused by wars.

Daiki Kinoshita, representing Soka Gakkai, submitted a thesis titled “International Humanitarian Law and Nichiren Buddhism” before the conference. Its abstract reads as follows:
“Based on Shakyamuni’s Lotus Sutra as interpreted by Zhiyi and Nichiren, it examines how specific Buddhist ethics are related to IHL principles. From the viewpoint of the Soka Gakkai, it also looks at how three doctrines (the dignity of life, the variability of life and the interconnectedness of life) are congruent with some IHL principles.” The paper also analyzes how Buddhist organizations can be advocates of these laws and specifically looks at how the Soka Gakkai commits to IHL in terms of the use of nuclear weapons.

Based on this Kinoshita delivered a presentation at the session titled “Engaged Buddhist and Humanitarian Perspectives.” 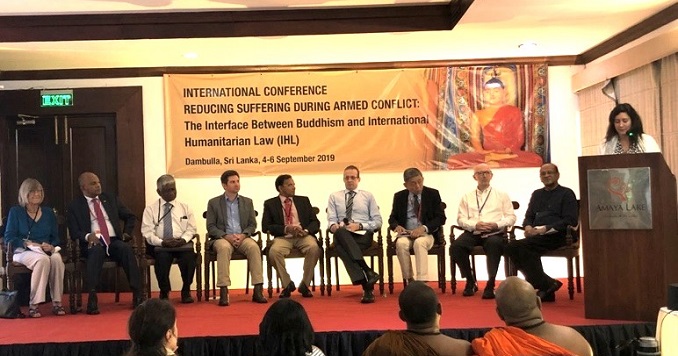